Overtime Loss Is Wakeup Call For Eagles Before Postseason Play

After four straight wins for No. 1 Boston College men’s hockey, it looked like the dominant Eagles would never fall from their throne. That is, until Friday night. The speedy No. 9 UMass Minutemen challenged the stagnant Eagle defense, sending the game into the Eagles’ sixth overtime of the season. A UMass breakaway led to a goal and a 3-2 loss for BC, shattering the Eagles’ win streak and ending their night on a sour note. Here are some key takeaways from Friday night’s matchup:

Despite a heartbreaking loss for the Eagles, one bright light for BC was sophomore Matt Boldy. Boldy has been a consistent force for the Eagles all season, but his talents have especially flourished the last few weeks. The sophomore forward leads the Hockey East in points per game with an average of 1.22, even after missing two games to participate in IIHF World Junior Tournament in December. On Friday night, he notched his ninth goal of the season and tied teammate Marc McLaughlin for the most goals scored on the Eagle squad, giving his team a one-point advantage over the Minutemen. The goal also broke Boldy’s tie with McLaughlin to become the team leader in points.

Boldy’s February hot streak began after he scored a game-tying goal against Boston University on Feb. 5. Last Friday night against Maine, Boldy notched two goals to seal the Eagles’ 4-2 win, one of which was short-handed. Not only will Boldy’s goalscoring tendencies be a key component for the Eagles as they enter into postseason play, but his undervalued playmaking abilities will also be key to the offense as well. Boldy leads the team in assists with 14 this season, an incredibly high number for a primary scorer.

Although the Eagles struggled in overtime against UMass, their penalty kill was very at the top of its game. The Minutemen were gifted with three power plays compared to the Eagles’ one, but the Eagles’ special teams successfully killed time utilizing icing and their own boards. Friday’s three kills bring BC’s total to 16-of-17 on penalty kills in its last four games, including a five-minute major and two full two-minute 5-on-3s last Saturday against Maine. Before Friday’s game, the Eagles had a penalty-kill rate of 84.6 percent and were ranked third in the Hockey East and 13th nationally for their penalty kill, a stat that will only increase after Friday’s matchup.

Usually when a team loses on a breakaway goal, fans assume the loss was at the goalie’s hands. The reality is, however, that a team cannot only rely on a goalie to do all the work, and Spencer Knight still impressed with a total of 36 saves and a save percentage of .923 on Friday night. Friday was Knight’s 50th NCAA start in an Eagles jersey. His impressive record stands at 37-9-4 in his first 50 starts, and he had produced a win percentage of .786 before Friday. Although Friday didn’t go his way, Knight has been a strong force in the net all season, which will likely carry over into the postseason. 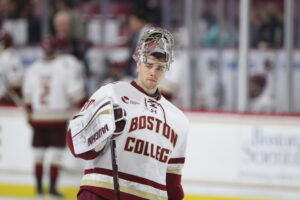 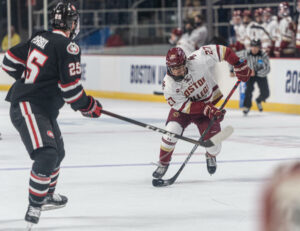