Don’t be surprised if you see brightly colored knitted scarves strewn across a tree in the upcoming months—they are meant to be there. In an effort to brighten up the City, Hooked on Newton has been knitting all winter in preparation to yarn bomb Newton this spring.

Danielle Moriarty, the associate director of Newton Cultural Development, described yarn bombing as a form of artwork that involves wrapping objects in the town such as trees, benches, and light posts in bright, colorful knits in order to beautify public spaces.

“I think it’s really about bringing joy and beauty and just an overall happiness to folks during these really challenging times, and the colors and the vibrancy and the unexpectedness of yarn bombing I think will be a great way to kind of be maybe a glimpse of small moments of respite and joy for people,” Moriarty said.

This socially distant activity allows for the community to learn a new activity and display their work for all to see, Moriarty said. She described yarn bombing as a creative way to bring the community together and bring a smile to people’s faces.

“What we’re going for is really those unexpected moments where you’re not expecting, you know, a lamp post to be wrapped in neon green and pink and blues,” Moriarty said.

Although an official date for the yarn bombing has not been set, Moriarty said the exhibit is looking to start on June 11, which is National Yarn Bombing Day. She said this would coincide with the national day and allow the exhibit to stay up for the duration of the summer. Due to the nature of yarn fibers, yarn bombing is only temporary, Moriarty said

There are approximately 40 people on the participant list with four leaders working to share their skills and teach over Zoom sessions, Moriarty said.

“We’re hopeful to have an installation at the Newton-Wellesley Hospital to kind of have that be a pinpoint to recognize and celebrate the essential workers there during COVID,” Moriarty said.

In typical COVID-19 fashion, Moriarty said all of the preparation and skills sessions for this project happened over Zoom, allowing the community to stay connected while remote.

“So what we did is encourage participants to get together for skill shares and Zoom sessions where they can teach each other techniques and stay connected with each other, but in a physically distant way, so over Zoom and throughout the winter just to kind of maintain connection during these dark New England days,” Moriarty said.

Moriarty said Hooked on Newton came about as a way to implement a COVID-safe activity that would brighten up the community, especially going into spring.

Moriarty said this program is open to people of all ages in the community, though there has been a focus on the older community due to the nature of knitting being more common in older demographics. The program has collaborated with the director of over-55 programming through Newton Parks, Recreation and Culture to help engage Newton’s older residents as well as to help with project management and coordination.

“We felt this was an important person to bring in particularly given that older folks are particularly isolated during these times of COVID and also over the winter, so we wanted to make sure that that was a population that we were engaging,” says Moriarty.

This project is ongoing and Moriarty encourages anybody that is looking to join to reach out about involvement. She said that the center would be happy to have anyone join and participate in the project. 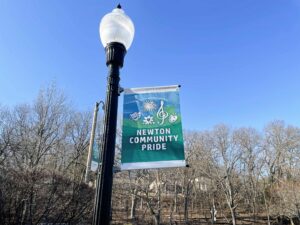 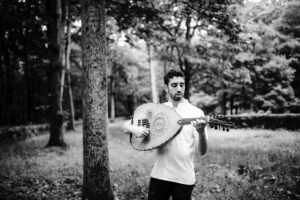