Home » The 12 Percent: BC Must Do More For Its International Students
Opinions, Column

The 12 Percent: BC Must Do More For Its International Students

Three years ago, on a muggy August afternoon, I found myself unloading cardboard boxes and oversized duffle bags from a rental car as I moved into my freshman dorm at Boston College. Somehow, the nervous 18-year-old girl from Sydney, Australia wound up in Chestnut Hill, Mass., ready to begin her life as a college student. I had no idea what I was doing in Boston. All I knew was that I wanted to get the best out of my college experience—but what exactly was that? My only knowledge of American college came from cliché movies like American Pie and Pitch Perfect. Needless to say, I wasn’t very well prepared.

Adjusting to life at BC was difficult to say the least. Somehow, everyone that I met seemed to live somewhere in Massachusetts or was “from the Northeast”—whatever that meant. Despite meeting a ton of warm, friendly people and going out on the weekends with groups of girls, I felt out of place. Everything was so different from what I had expected, and people weren’t interested in the same things that I was. Nobody had lived abroad or traveled to the places that I loved so much. Stories of my homestay in Cambodia and the amazing hospitality that I experienced in Abu Dhabi weren’t met with the same enthusiasm or interest as those from other students connecting over their vacation spots on the Cape or ski towns in Vermont.

It wasn’t that I thought my experiences were more interesting or better, I just came to realize that people cared less about a world outside of the U.S. than I did. I wondered if anybody else was feeling the same way I was and even if I should be feeling this way. Surely, it would just take some time for me to adjust and feel at home in Chestnut Hill … right? Well, yes and no.

Freshman year is tough for everyone. Eventually you settle in and find your niche, just as I have now that I am a junior. You find “your people,” track down your favorite study spot, head into Boston for your favorite restaurants, figure out American spelling and grammar, and slowly assimilate to the culture (though you never quite get used to the weather).

That being said, research shows that the difficulties that international students face when adjusting to college are quite different from the ones their native counterparts face. One study found that “international students deal with academic challenges, social isolation, and cultural adjustment. Specifically, academic challenges included communication with professors, classmates, and staff.”

I argue that these findings are an understatement. I am lucky enough to have grown up speaking English, so I have had an easier time with communication than some. But even still, there is a difference in how I write, the expressions that I use, the slang that I am unfamiliar with, and cultural references that I still don’t understand.

It is the accumulation of all of these small differences that contributes to feelings of “otherness.” Over time, I have become accustomed to these differences and have begun to feel comfortable in this new culture, but there is still a sense of missing what I grew up with. I was also lucky enough to join the board of the International Club my freshman year and find a group of people that shared similar challenges with transitioning into BC culture. Many still struggle, and in my view, that comes down to a lack of representation and diversity, as well as not feeling heard.

So why does BC not diversify its international population more actively? That is most definitely a question for the administration. I am more concerned with the current international population and how this lack of representation affects us. Transitioning to a new country can be extremely difficult, and it’s even harder when you are part of a very small minority.

I am not advocating for total subversion of BC’s America-centric culture. I love the no-nonsense earthiness of New Englanders as much as the next person, but the school simply needs to do more for its existing international population.

Currently, BC does not offer enough resources for its international students, and those that it does are not known widely enough. The Office of International Students and Scholars does offer a number of links to services such as “Academic Support” and “Life at BC”, but it lacks specifics about the international experience at BC, particularly advice on social life. BC has an International Assistant (IA) program but it is not well known. Most of the international students that I know are not even aware of the program, which is a problem that could be easily remedied if BC publicized it more. Also, the application process to become an IA mentor is pretty laborious: It involves agreeing to a semester-long commitment, completing a seven-page application form, and submitting a three-minute video prompt. This application process poses a problem to the program itself because its intense and excessive nature deters many students from becoming mentors. If the application process were to become less intense, or even eliminated entirely, and the program was more publicized, the program would most likely grow in size and popularity. If the University were to reform and put more resources into this program, it would make all the difference for the international student community.

BC is home to so many amazing people, international and American. Some of my closest friends are from New England and others are from abroad (like my roommate, a family friend from Australia who I bumped into freshman year). I know that the international community has so much to offer here in terms of character and perspective, and every student at BC would benefit greatly by seeing it strengthened. 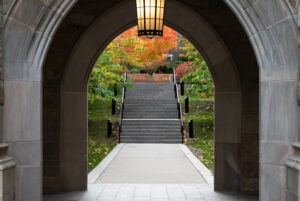 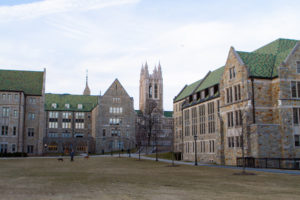