In just one day, Boston College lacrosse made a complete turnaround. After barely eking out an overtime win over Louisville—a team that hasn’t won an ACC contest in nearly four years—on Friday, BC dominated both ends of the field on Sunday. And the Eagles have Jenn Medjid to thank.

All season, the Eagles’ opponents have come to know just how dominant Charlotte North can be on the attack, and Louisville was no different, face guarding North for practically the entire game. For the first time in 38 games, North was held without a point. Though the threat of North was minimal, the Cardinals failed to account for BC’s versatile offense.

Even when North isn’t producing on the attack, the Eagles have flourished on offense due in large part to her dominance in the circle. North recorded a career-high 13 draw controls on Sunday, which kept BC in its offensive zone for the vast majority of the game. All together, BC won 16 of the game’s 23 draw controls.

But what’s a great offense without a lockdown defense?

Rachel Hall led the charge in the Eagles’ defensive zone, picking up six saves and allowing just two goals in almost 50 minutes of play. Abbey Ngai took over for the last 10 minutes of the game and allowed one goal on three shots on net. The only blemish on Ngai’s stat sheet came with just 17 seconds left in the contest, as Kylea Dobson tacked on an unassisted goal in garbage time.

BC opened the scoring about two minutes into the game on a goal by Courtney Weeks, followed by one from Smith under one minute later. Louisville then responded with its only two goals of the first half in rapid succession.

With the game tied at two, BC’s defense went into lockdown mode. The Eagles held Louisville scoreless for 54 minutes while going on a 16-0 run to take a commanding lead. Eleven of those goals came in the first half, and the Eagles headed to halftime ahead by a comfortable 11-point margin.

With such a generous cushion, the Eagles put less pressure on scoring and focused on burning out the running clock. BC tacked on just five goals in the second half, the third-fewest goals they’ve scored in a half all season, but even without their typical hefty offensive production, the Eagles’ lead was never in doubt.

Medjid accounted for two of the Eagles’ five second-half goals, and Caitlynn Mossman added a goal and two assists in that period. After such a prolific game, Medjid now has 27 goals on the season, behind only North with 31. Smith’s hat trick solidified her spot as third on the team in goals with 20 on just 27 shots. 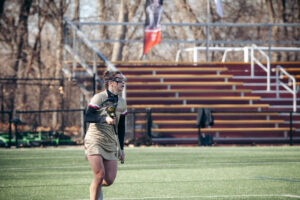 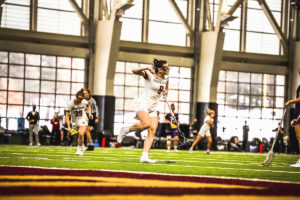