After plenty of coverage involving the college admissions bribery scandal in early 2019, the latest Netflix documentary attempts to lay out exactly how wealthy families were able to use financial leverage to assure their children were accepted to prestigious institutions. Operation Varsity Blues: The College Admissions Scandal from experienced documentary director Chris Smith successfully packages everything buried below the bombshell headlines. At under 100 minutes, it’s an easy watch.

Starting in 2011, Rick Singer, a private college counselor began using what he called “the side door,” where he accepted payments from wealthy families and in return got their children admission to a college of their choosing by enrolling them in niche sports. The film uses the terminology of doors often, referencing the “front door” as the standard acceptance into a college. The “back door” is gaining acceptance through enormous donations—sometimes up to tens of millions of dollars—to encourage admission teams to give applicants a second look.

To cover the malpractice, Singer accepted bribes as donations to his non-profit organization. Over the course of almost a decade, eager parents paid close to $25 million to Singer, who developed a web of connections from college coaches to SAT proctors in order to get students into their desired school.

The documentary uses real recorded phone conversations between Singer and parents involved in these admissions scandals to depict what happened, creating a quasi-narrative feel for the documentary. What Smith does best is break scenes up into bite-sized pieces.

Matthew Modine plays Singer, whose impersonal character comes across through his straight face and reserved dialogue. Audiences are introduced to Singer on his daily 4 a.m. jogs, and other characters attest to his only focus being his work. Audiences see him deceitfully pitch to parents who are determined to have their children attend a prestigious school, essentially being a salesman. Every pitch and conversation takes place over a phone, and the lack of inter-character interaction further contributes to Singer’s cold persona. Overall, he comes across as both a closed-off and shockingly ambitious mastermind.

Part of these parent’s determination stems from the social status that is attributable to a son’s or daughter’s enrollment at an elite university. The film explores how Singer exploits this perspective for profit, as there are several examples of Singer pushing parents to commit to the bribery because their child otherwise would have no chance of attending a prestigious university.

The film dives into the punishments given out to parents who participate in these nefarious acts, explaining how many of the wealthy contributors were first implicated and then caught. Near the end, one interviewee speaking of the end results says “no good will have come out of these sentences and out of this scandal.” While pessimistic, the truth behind her statement reflects the exclusivity associated with prestigious universities.

As college tuition continues to rise, prestigious universities, including Boston College, feed on the vantage point of college education being the only route to a successful life—as there is an assumed linear association between a high-ranking college and a prosperous future. The more exclusive a university is, the better off your life will be. At an institution like BC, viewing the film allows for audiences to reflect on why they attend BC in the first place, and whether the cost of a BC diploma solely represents a multi-dimensional education or whether it stands for something more.

Operation Varsity Blues is about more than just the scandal, equally focusing on the way wealthy people are publicly perceived, both loathed and revered in our culture.

“In America, we love the wealthy and we hate the wealthy,” one interviewee said near the end of the film. “They disgust us and they fascinate us.”

The scandal itself was widely publicized due to the involvement of many well known wealthy and powerful people. While laying out exactly how the scandal occurred, the film also encourages audiences to question wealth and its power in the United States. 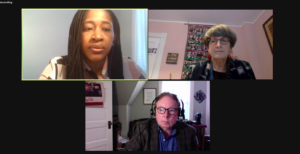