The Band CAMINO Proves its Talent on New Album

The Band CAMINO’s self-titled album has been a long time coming. The group, consisting of Jeffrey Jordan, Spencer Stewart, and Garrison Burgess, formed in 2016 and found success with its songs “Daphne Blue” and “See Through,” both of which appeared on the band’s 2019 album tryhard. This past year was shaping up to be a big one for the band, as it was expected to release its album and slated to open for both 5 Seconds of Summer and Dan + Shay until the tours were postponed. The band clearly made good use of its down time, though, and it shows on its new album. The Band CAMINO, released on Sept. 10, showcases the band’s pop-punk and rock leanings while managing to convey equal parts heartbreak and hope.

“1 Last Cigarette,” which was released as a single earlier this year, is a high tempo track about someone being out of control and down on their luck. Driven by heavy, pounding drums and a catchy electric guitar riff, the chorus shows off the band’s pop-punk influences and concludes with, “I lost my shit now all I got left / Is ten missed calls and one last cigarette.”

While these songs from The Band CAMINO are high-octane rock songs, the album is not without intense moments of self-reflection and intimacy from the band. “Sorry Mom” is one of these, and it is essentially one long heartfelt apology to the singer’s mom. The song consists mainly of a single acoustic guitar, the only one that notably appears on the album, which creates a very sincere feeling and displays The Band CAMINO’s immense talent for taking personal and relatable experiences and sharing them with the world.

“Roses” might be the song that best exemplifies The Band CAMINO’s debut album. It features the band’s easily recognizable sound with a memorable synth and driving drums. Lyrically, this track ties the band’s fantastic debut album together well, in that it recognizes that life isn’t always perfect, but that doesn’t mean you can’t “Stop and smell the f*****g roses.” 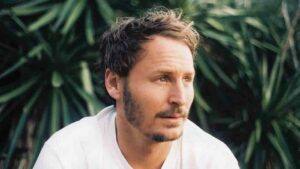