BC Snaps Losing Streak With Win Over Syracuse

Boston College volleyball traveled to Syracuse twice in the shortened 2020 season, with both matches resulting in 3–0 sweeps for the Orange. In fact, entering Wednesday night’s ACC opener in Chestnut Hill, Syracuse held a seven-game win streak over the Eagles dating back to 2016.

Graduate captain Clare Naughton continued to lead the offensive charge for the Eagles, posting a career-high 21 kills on .300 hitting percentage.

Though the Eagles exhibited stellar play across the board, winning 25–17, 22–25, 25–17, 25–16, head coach Jason Kennedy couldn’t understate the importance of playing in Power Gym.

“Well, home court advantage is huge,” Kennedy said. “We had people coming in left and right and making noise, which definitely helped us tonight.”

While Kennedy was quick to acknowledge the importance of fans in Power Gym, something the Eagles had been missing for almost two years, the players cheering from the Eagles’ bench were the ones who set the tone from the jump.

Set one kicked off as a back-and-forth affair, but an ace from junior Gabby McCaa to tie things at 12 apiece helped to propel a 10–1 BC run. A couple of huge digs from sophomore libero Anna Murphy and a match-winning kill from Alayna Crabtree saw set one go to the Eagles 25–17.

The Orange came out hot in set two, taking an early 10–5 lead. A 7–1 run for the Eagles helped BC to regain the lead, but Syracuse held on to take the set in a narrow 25–22 victory.

The final two sets were all BC. Five kills in the third from Naughton helped BC take set three 25–17 and a 2–1 match lead.

The Eagles jumped out to an early lead in set four, and back-to-back blocks from McCaa and Amaka Chukwujekwu followed by a Chukwujekwu slam made things 16–10 in favor of BC. From there, the Eagles never looked back, taking the fourth and final set 25–16.

While a win to open up conference play is never a bad thing, Kennedy said the Eagles aren’t satisfied and have their eyes set on Duke, which they square off with in Durham on Friday. 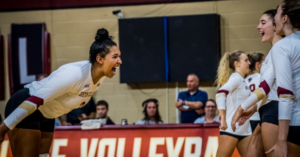