Shang-Chi and the Legend of the Ten Rings could have easily been a lower budget, half-baked attempt at diversity sprung up to take advantage of America’s recent fascination with Asian media. In a surprising turn of events, the film’s gripping fight scenes, thoughtful character design, and electric soundtrack actually make it one of Marvel’s most empowering movies.

The film starts by recounting the legend of the ten rings, which gave Xu Wenwu (Tony Leung), their wielder, otherworldly power. Then, in a stark tonal shift, the movie cuts to Shang-Chi (Simu Liu), Wenwu’s son, who currently lives in San Francisco parking fancy cars as a valet driver. Though he escaped his father’s ruthless empire years ago, Shang-Chi’s old life comes back to find him when Wenwu sends his henchmen to capture Shang-Chi’s amulet, given to him by his late mother Ying Li (Fala Chen).

In most action films, flourishes and spins in combat seem extraneous and often detract from a fight’s impact. In Shang-Chi, however, the different fighting styles relate to each character’s development and mindset. Shang-Chi’s initial actions are fierce and forceful, and he often pushes violently outward, preventing enemies from getting too close. But, by the end of the film, he learns to open up, switching from clenched fists to open palms. His movements become more relaxed, and he isn’t afraid to let his attackers draw close before he turns their own strength against them.

Though the main conflict occurs between Shang-Chi and his father, the film is also full of powerful, multi-faceted women, from Shang-Chi’s aggressive, tough sister, Xu Xialing (Meng’er Zhang), to his hilarious friend Katy (Awkwafina) to his kind, supportive Aunt Jiang Nan (Michelle Yeoh). And, once again diverging from typical action, Shang-Chi devotes significant roles and screen time to each of these characters. Xu Xialing’s fights are often even more physically impressive than Shang-Chi’s, and Katy’s dialogue is the source of most of the film’s comedic moments. Perhaps most importantly, Aunt Jiang Nan teaches Shang-Chi how to fight with grace and self-assurance. The film masterfully showcases a range of Asian female characters, all with their own well-developed backgrounds.

Shang-Chi is also extremely thoughtful in how it employs white side characters. Those who enter Ta Lo, the original home of Shang-Chi’s mother, are taught a lesson in how to approach someone else’s territory. This portrayal serves as an alternate reality to America’s history of invading Asian land.

Beyond the well-choreographed fight scenes, high production value, and female empowerment, Shang-Chi is set apart by a tone of, surprisingly, straightforward realism. The movie is liberal with its postmodern jokes—exhibited by a man livestreaming Shang-Chi’s fight on a bus and a flight attendant interrupting Shang-Chi’s heartfelt backstory to ask what meal he’d like on a plane. Though the film is clearly set in a fictional realm, Shang-Chi somehow punctures the veneer of movie magic in the best way possible, making viewers feel as if Shang-Chi’s story actually takes place in our world. 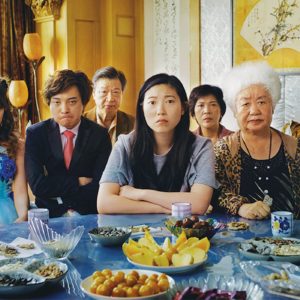