With the leaves beginning to fall and the air turning chillier, Boston held its first annual Fall-o-Ween Children’s Festival on Oct. 22 in anticipation of the first normal Halloween in two years.

“We haven’t had events like these during COVID, and I think that this is the first time that the public’s really gathering like this,” Mariam Vadria, a local attendee, said. “There wasn’t anything during the summer in the neighborhood or in [the Boston Common], so it’s a good vibe.”

The event was organized by the Boston Parks and Recreation Department, who had in previous years hosted the Annual Fall Pumpkin Float at Frog Pond to celebrate the start of autumn.

This year’s Fall-o-Ween event aimed to incorporate parts of the Pumpkin Float, such as an inflatable slide and maze, a glow-in-the-dark park with LED swings and seesaws, and booths with treats and crafts, while also adding more festive and Halloween-themed entertainment.

The festival included a merry-go-round, performances by an aerial artist and stilt walker from the Boston Circus Guild, and a Day of the Dead–inspired mural from the Mayor’s Mural Crew.

In place of lighting up the pond with floating pumpkins as done in previous years, the festival had a small train, built in the drained Frog Pond, for kids to ride hosted by Cabot Creamery Co-operative.

One of the main events of the day was a demonstration from LEGOLAND Discovery Center Boston, in which spectators were treated to a display of a giant Dracula LEGO while LEGO Master Model Builder Sean Martin taught kids how to build their own Dracula .

Seemingly every which way attendees turned, there was yet another fall-themed game or activity for them to enjoy.

“We went to the big inflatable slide, the carousel, we got some ice cream sandwiches, watched that acrobat dancer, and now we’re getting some special lights for Halloween night,” attendee Erica Allen said.

Families were also encouraged to come dressed in their Halloween costumes.

“I have two kids and they’re both dressed up as Spider-Man, which I think adds to the fun of it,” Allen said.

Attendees, arriving from all over the Boston area, learned about the event through their local newspapers as well as neighborhood Facebook groups.

“I’m on a Facebook group for my neighborhood and someone posted the ad or the link for Boston Common parks, and that’s how I found it,” Vadria said.

The city also hosted a virtual pumpkin carving contest that began on Oct. 12 and went through midnight on Halloween. First prize winners will be rewarded with a $75 gift basket courtesy of Cabot Creamery Co-operative. 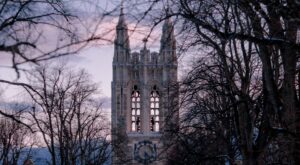 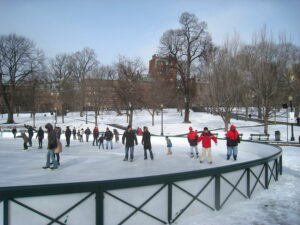