BC Scores Four in Win Over Merrimack

Boston College men’s hockey has had a far from perfect start to its season. Losses to unranked Bentley, Colorado College, and Vermont weigh down the Eagles’ record despite plenty of individual success. But searching for its second straight win, BC looked like the team that earned an NCAA Tournament bid one season ago.

An even first-period shot count at 11 apiece doesn’t tell the full story of the opening frame. Before most fans had even taken their seats in the Volpe Athletic Complex, Mike Posma’s toe drag was too much for Merrimack goalie Zachary Borgiel to handle. Posma slipped it past his left pad for his first collegiate goal.

After the Warriors committed a minor penalty, the Eagles struggled on the power play, missing several passes and failing to get in a rhythm.

The Eagles’ fortunes were reversed, however, at the end of the period. After a productive power play with cohesive passing, Helleson hit a one-timer on a cross-ice pass to snipe it into the back of the net past Borgiel’s right shoulder. BC secured its 2–0 lead despite being dominated in the faceoff circle 15–6 in the first 20 minutes of play.

The second period featured far less excitement despite absolute domination by the Eagles in both the stat sheet and the flow of the game. On the stat sheet, the Eagles outshot the Warriors 20–2 despite Merrimack’s two man-advantages in the period. The Warriors couldn’t get set all period because of a stout Eagle defense.

BC goaltender Eric Dop made a big play three minutes into the period to stop the only major Merrimack chance in the second frame. The puck landed in the crease after a shot, and the Warriors crashed the net, but Dop cleared the puck out with ease to stymie the brief scare.

Merrimack committed two more penalties in the period, continuing to feed the Eagles’ momentum. The first of the two penalties, a delay of game called on Jake Durflinger, led to a power play in which the Eagles had several solid chances, but they could not convert any of them, leaving the period scoreless.

The third period was the only one in which Merrimack led in shots, but the Eagles struck first after Kevin Sadovski slipped bringing the puck out of the defensive zone. Nikita Nesterenko took the loose puck to the front of the net, dishing it to Brandon Kruse to take a three-goal lead.

The Warriors would get one back when Mac Welsher jammed a rebound past Dop on a rebound. The goal did not seem to faze the Eagles, however, as Patrick Giles put away an empty netter to regain the three-goal lead, which they maintained for the rest of the contest. The win marks the Eagles’ seventh consecutive win against Merrimack.

Featured Image by Steve Mooney / For The Heights 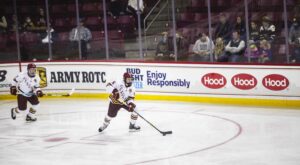 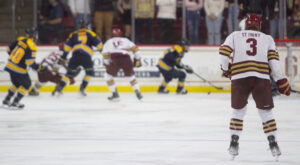