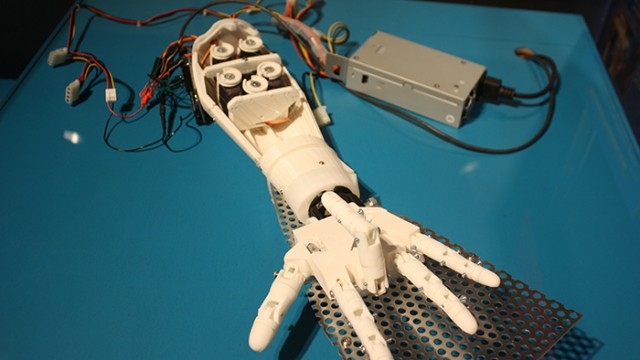 The Massachusetts Institute of Technology Museum is featuring several student inventions in an exhibition called Inventions: 2014 Student Showcase. Among the inventions displayed are a robotic arm and a device that allows one to grow plants in a soil-free environment with the touch of a smart phone. These original inventions and nine others have been on display and open to the public since May 30.

The featured projects and prototypes are the work of both undergraduate and graduate students at MIT, who developed their respective inventions for a variety of reasons—to learn, explore, play, communicate, create a product, and improve the world. Alexander Goldowsky, the director of exhibitions at the MIT Museum, explained how the Museum works with students through a variety of programs and classes, and the exhibit grew out of this relationship.

“We wanted to let our visitors see some of the amazing work that students produce, as part of classes, clubs, or just personal projects,” Goldowsky said.

Preparations for the showcase began with a campus-wide call for submissions, with students submitting their concepts to various MIT departments and labs—including the MIT Media Lab, the School of Architecture and Planning, and the Department of Aeronautics and Astronautics—which then chose the submissions that best reflected MIT’s values of creativity, ingenuity, and practical problem solving.

Many of the showcase pieces involve audience interaction, making the process a learning experience not only for the students but also for the museum staff who were involved in the setup. Goldowsky noted that there is a difference between designing and arranging an invention for one user versus for an exhibition with 100,000 museum visitors. “I love the sounds [the exhibition] produces, a mix of several of the musical works and the sounds of visitors,” Goldowsky said.

Susan Timberlake, assistant exhibit developer and project manager at MIT Museum, described her role within the process as interviewing each student whose work was accepted into the exhibit to learn about his or her process of design and invention. These stories are told in the exhibit label text to give visitors a feel for who the students are. “We hope to communicate that MIT students learn not just through their classroom experiences, but also through a variety of creative and real-world projects,” Timberlake said. Goldowsky added that, while there is no way to capture the incredible diversity of what occurs at MIT, he hopes the showcase “gives a flavor of the energy and creativity of the students.”

Some inventions serve practical purposes, while others are aimed at addressing large-scale issues. For example, seniors in the civil and environmental engineering program invented the MIT Air Quality Network, which is a network of sensors that collects data about air quality around MIT’s campus. MIT student Adam Whiton’s The Zipperbot serves a more practical use by opening and closing zippers using motors and gears. Another visitor favorite   is SproutsIO by Jennifer Broutin, a smartphone-controlled appliance that grows plants without soil, which serving as a micro-farm that encourages eating locally grown food.

Reflecting the musical creativity of MIT students is DrumTop, a creation of doctoral student Akito van Troyer and one of the showcase’s most popular inventions—a visual representation of the intersection of music, science, and technology. Van Troyer works in a group called Opera of the Future in the MIT Media Lab, which focuses on music performance, composition, and expression-related research with the goal of using innovative, cutting-edge technology to engage people in music. Appropriately, van Troyer’s specific research area is “innovating ways to turn anyone into a composer and a performer of music.” By creating musical environments or interfaces that allow people to explore and play with music, van Troyer further experiments with how this act of playing music can then turn the participant into what the talented student deems a “practitioner of music.”

Van Troyer’s dedication to his research goals led him to create DrumTop, what he described as “a tangible musical sequencer that transforms everyday objects into percussive musical instrument.” He explained that the main goals of this invention include creating a simple physical interface that gives voice to everyday objects, affording self-expression for novices, and encouraging these novice musicians to explore the musical potentiality of their surroundings through musical interactions with everyday objects.

In addition to the 11 inventions on display, the showcase also includes seven “kinetic art” sculptures from MIT’s Exhibiting Science class, as well as a talk by MIT Museum Director John Durant. Inventions: 2014 Student Showcase will be on display at the MIT Museum through Dec. 31 at $10 for regular admission.

Goldowsky hopes, above all, that visitors will be inspired by the student work they see. “I hope when you see what can be done by creative students working together or individually, it inspires you to create something of your own,” he said.