Home » A (Purely Speculative) Guide To The Fall Movie Season 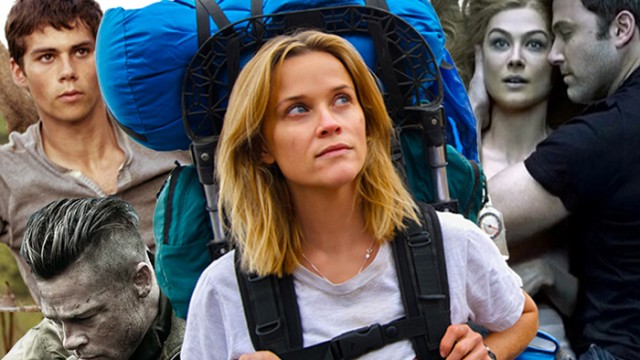 A (Purely Speculative) Guide To The Fall Movie Season

There are few things I enjoy more than making bold declarations about movies I haven’t seen. The Artist should never have won an Oscar. The Secret Life of Walter Mitty was an abomination of a brilliant short story I’ve never read. Of course I haven’t seen either of these movies. If you graciously read this column last year, you’ll remember my soft assertion that the romantic comedy is a dying genre. And I think I come out fairly well on that one. Scrolling through IMDb’s list of upcoming movies, I can’t spy a single one. Not that romance is dead. There are about 50 rom-com sitcoms premiering across television this fall, but I think I deserve some recognition regardless. Now, if you paid to see That Awkward Moment, you have my deepest sympathy. I truly never meant to do any harm. Sometimes, usually, I’m wrong.

On that note, off we go. This fall features (shockingly) a few sequels, two different movies about a woman walking really far, Mathew McConaughey in space, and a hobbit. I can see three things distinctly in my crystal ball. Gone Girl will unquestionably be my favorite movie of the year. Alexander and the Terrible, Horrible, No Good, Very Bad Day would be my least favorite movie if I actually saw it. And at midnight on Dec. 19, I’ll be in line to see The Hobbit: The Battle of Five Armies in a mix of excitement and apprehension. Everything else lies shrouded, hidden like Durin’s Door before moonlight.

Last year I could boldly declare that Gravity or The Wolf of Wall Street would win the Oscar and not sound like an idiot. Spoiler alert, this is a weird year for movies. It might be the weakest year since 2011 (take that, TheArtist). This summer didn’t have any behemoth blockbusters, and this fall likewise lacks any behemoth Oscar contender. It’s a bottom-heavy field. This doesn’t mean it won’t be fun. I had more fun at the movies this summer than most years before. Just like Bilbo surprised and proved crucial to Thorin’s quest (fine, last Hobbit reference), some little movie will come out of nowhere and steal your heart. Some, though, will try to steal your lunch, but that’s life at the movies.

Kicking off the fall festivities next weekend is the latest young-adult dystopian adaption, The Maze Runner. When something works, stick with it. If ain’t broke, don’t fix it. (Insert favorite sports jargon here). Hollywood will continue to throw these movies at us until we stop watching them, and given that there is still a mountain of dystopian young adult literature out there to be plundered, it can produce them as long it wants. “Your fate is in your hands,” Katniss would say. Shut up, Katniss. Who knows, maybe TheMaze Runner might have something new to say. I’m excited for Dylan O’Brien (Teen Wolf) and Kaya Scodelario (Skins) to make their decisive leap to the big screen, after years of great work on television cult classics. Okay, maybe Teen Wolf isn’t a cult classic, at least not yet. My gut says The Maze Runner is just keeping the seat warm for The Hunger Games: Mocking Jay Part One. My heart hopes it surpasses that absurdly titled movie.

Paired with The Maze Runner for a Sept. 19 release, Hector and the Search for Happiness starring Simon Pegg looks like The Secret Life of Walter Mitty without the reckless creative abandon. It goes for pleasantry, not shock, which is a welcome approach.

Gone Girl is set to pick up the pieces in October. What can I say about a movie I already love but haven’t seen? Fincher, Affleck, the wondrous rural Missouri country side. When David Fincher is given a good story, he makes a great movie (ex. Se7en, The Social Network). When Fincher is given a lousy story, he makes a good, though tiresome movie (ex. The Curious Case of Benjamin Button). Scripted by the novel’s author, Gillian Flynn, Gone Girl has a great story, and it’ll take a precise filmmaker to convey its intricacies. Thankfully, there’s no one as precise as Fincher. I’d pay $30 to see this movie. Fine, I’ll take you to see this movie.

Brad Pitt returns to the war movie on Oct. 17 with Fury, which follows Pitt and his Sherman tank crew behind enemy lines. Will we be making movies about World War II in 2050? Probably, and if Brad Pitt is still in them, I’ll still be watching them. No one is as consistently believable in war as Pitt. Fury also features Shia LaBeouf, bearded not bagged.

I’m perfectly comfortable walking into Christopher Nolan’s Interstellar in November with no idea what it may be about and will be perfectly comfortable walking out of the theater three hours later with no idea what I’ve seen. I know enough about wormholes to I know that I’m not going to understand the plot of this movie. For those interested, that Hunger Games movie comes out in November, too.

Reece Witherspoon has three movies coming out this fall. One (The Good Lie) will be instantly forgotten. One (Wild) will earn her an Oscar nomination for pretending to walk 1,100 miles. And one (Inherent Vice) will be one of the best movies of the year, because it’s directed by Paul Thomas Anderson.

Capping off the season, Ridley Scott continues to document every epic moment in human history with Exodus: Gods and Kings, which surprisingly doesn’t star Russell Crow—probably only because he played Noah only a couple months ago. Christian Bale stars as Moses and Jessie Aaron Paul supports as Joshua.

Then there’s the final Hobbit.

I’m fairly certain I’ll regret 80 percent of this in a month. But that’s why going to the movies is fun. Expectations are realized and crushed. Just go see some movies.