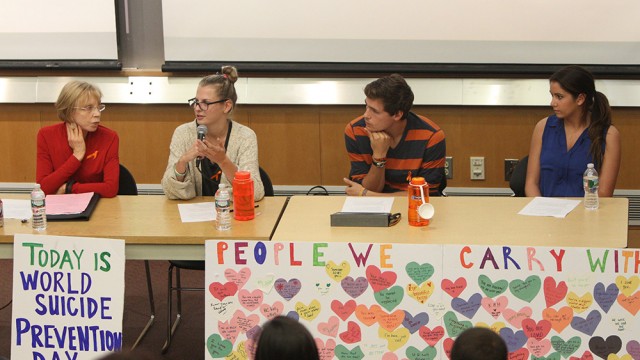 A few weeks ago, the world lost a great man. You may have known him as the teacher who challenged you to seize the day, or as a cross-dressing nanny. Maybe you knew him as a therapist who knew how to get the girl, or a genie that could grant wishes. There are many ways in which you could have come to know Robin Williams, but for most of us, the roads led to the same thing—a deep love of and appreciation for his work.

Upon the news of his death, the world was left dumbfounded and numb. An outpouring of love and heartache filled social media as family, friends, and fans shared their sorrow and support. Amid the many messages, however, a certain tweet raised controversy and highlighted an important problem that often accompanies celebrity suicides. The tweet, sent by the Academy of Motion Picture Arts and Sciences, was a screenshot from Disney’s Aladdin with the caption, “Genie, you’re free.” Of course, the picture was tweeted with the best intentions—it was meant to capture the heartbreak felt upon hearing Williams had taken his own life. Yet, the controversy over the tweet was not unwarranted, as it dangerously romanticized Williams’ mental illness and implicitly condoned his suicide.

Romanticizing suicide and mental illness occurs frequently in the arts. Many are quick to point out the common denominator between some of the nation’s greatest creative minds, such as Sylvia Plath, Ernest Hemmingway, David Foster Wallace, and Heath Ledger. To make such a connection is dangerous—it suggests creativity and mental illness are directly related, even though a connection has never been close to being proven scientifically. In fact, all this false connection does is subtly romanticize and idealize mental illness and, ultimately, suicide.

Such subtle romanticism is a prominent problem in our society, as it leads to a society in which the obvious romanticism of suicide becomes acceptable. Take, for example, the fashion spread from the magazine Vice in its 2013 Fiction Issue. The spread, entitled “Last Words,” features photographs of models reenacting the suicides of female authors. The images are beautiful, arresting, and dangerous. They make the harsh reality of suicide and mental illness appealing. Instead of showing the anguish and hurt that drove these writers to suicide, the acts are depicted as graceful. Vice claimed the shoot was a tribute to the authors, but in reality, it directly connected the mental agony of the authors with their creativity while further promoting the myth that suicide is beautiful.

Such romanticism is very dangerous and has led directly to an increase in copycat suicides. For example, after Goethe’s Sorrows of Young Werther was published, suicides sharply increased in Europe, with many using a similar method as Goethe’s main character. In 1962, a similar phenomenon occurred in the U.S. after the death of Marilyn Monroe.

According to Christine Moutier, the chief medical officer at the American Foundation for Suicide Prevention, the scary reality behind romanticizing suicide is that it presents suicide as a valid option. This is one of the direct problems with the Academy’s tweet—it subtly condones Williams’ act. By saying Williams is now “free,” the Academy put a positive message behind the act and thus presented it as acceptable. It is important to understand that suicide is not a path to freedom—it is a cessation of all freedoms. It is dangerous to hint, however subtly, that suicide is liberating—a freeing and reasonable choice. Furthermore, the tweet unintentionally created a legacy around Williams that is a direct consequence of his suicide. The danger of this is harder to conceptualize, but just as severe. Many suicide prevention organizations warn about the glorification of those who commit suicide, for suicide may then appear to others as a way to achieve their own glory or leave a legacy.

Thus, our society is in a difficult situation. While we should talk about Williams’ suicide in order to prevent others like it, we must be exceptionally careful about how we do so. This is where we can look to professional media and entertainment, which has a strict protocol as to how to discuss the topic, for guidance. Professionals in the field are careful to remember the happier times, stress the terrors of mental anguish, and prioritize the pain of the ones left behind. Such a careful approach to the topic is perfectly displayed in one of Williams’ own famous films, Dead Poet’s Society. After the suicide of one of main characters, the script focuses not on the “freedom” the character gained, but on the loss and harm he left behind, showing that suicide is not a valid option, but a cry for help that always comes too late.

There was a time when mental illness and suicide were topics both talked about and ignored at Boston College—they were talked about insofar as we said they should be talked about, but in reality swept them under the rug. This in itself is dangerous, for making the topics taboo simply makes it harder for those who need help to get it. Fortunately, BC is taking steps in the right direction, including UGBC’s upcoming BC Ignites: Mental Health and the different activities for Suicide Prevention Week. Still, we must proceed with caution. We must remember how important it is on a college campus to talk about mental health and suicide, but that it must be handled without romanticizing it, for allowing those who are in pain to see it as a valid option or a way to leave a mark can cause terrible consequences. So, we must talk about the help that is available on campus and that there is no shame in asking for it. We must create a dialogue that emphasizes how suicide affects those left behind and how help can make all the difference. Above all, we must be aware of and alert to the warning signs of suicide and prepared to reach out when one of the members of our community is in need. Human life is precious and fleeting as it is, so to honor Robin Williams, we should take his famous character’s wise words to heart—Seize the day, boys, seize the day.

suicide prevention Robin Williams
In The Zone: BC Band Free Alley Performs In Alumni
A (Purely Speculative) Guide To The Fall Movie Season