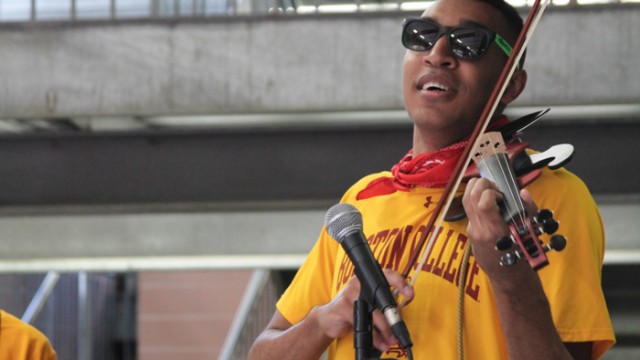 It’s been less than a semester since Juice handily won top honors at Battle of the Bands 2014—a major upset, considering most members of the eight-piece band were then only freshmen. The innovative hip hop, rock conglomerate has gained a large following at Boston College remarkably quickly. Saturday, Juice performed a lengthy concert at Alumni Stadium as fans geared up for the football game. The warm September morning lent itself well to the performance, and the turnout for Juice was especially strong. At points later in the set, near a hundred fans in Alumni had stopped to watch. The Heights breaks down the five best moments of Juice’s Saturday show.

Recorded by Kanye West in 2005, “Hey Mama” has remained a cult favorite among his fans. Juice’s cover of the song added a soulful component to the mix, with lead vocalist Ben Stevens, CSOM ’17, adding impressive riffs to the relatively simple melody. Juice’s massive line of strings (three guitars, one bass, one violin) helped transform the sentimental source material into something of a jam, making the song feel like the band’s own. Bonus points for dancing along on stage.

All right, perhaps this wasn’t technically part of the performance, but incidentally, good entertainment gets even better with giveaways—it’s a formula daytime television nailed down decades ago. At the SuperFan Zone, where Juice was performing, the University was giving away BC apparel with reckless abandon. Frequent announcements of raffle winners by the band’s violinist/vocalist Christian Rougeau, A&S ’17, added a certain character to the performance. No free cars have been given away by BC Athletics just yet, but we’ll have to check back on that after Parents’ Weekend.

Up all night to get lucky? Well, tailgating early day games then is probably a less-than-fond experience for you. Fortunately, catering was serving chicken and waffles with Juice, as well as a few other decent detox foods. Meanwhile, the band was covering Daft Punk’s 2013 hit, “Get Lucky.” A crowd favorite, the song showed off the band’s depth of vocals. Most young, unsigned bands have a front man who (hopefully) is into singing, but as for the rest of the group, best turn the microphone down. Juice has at least three vocalists who, given the song, could be mistaken for the front men. This added a lot of flavor to the chorus of “Get Lucky,” which was originally sung by Pharrell Williams.

2. Changing Keys In A Cover Of Beyonce’s “Love On Top”

Even Beyonce can, at times, struggle singing Beyonce, with one of the most challenging repertoires in pop music. So, when Juice took on Beyonce’s “Love On Top,” fearlessly navigating the song’s many key changes, you better believe it was a big moment at Alumni. Entire segments of the crowd broke into dance—and it was hardly even noon at this point in the performance. Stevens remarkably mustered up the vocal firepower to sell the song to the crowd, and Rougeau’s work on the electric violin dissuaded any leftover doubts about an all-male band covering Beyonce.

1. Original Song “How You Gonna Do Me Like That”

Guitarist Kamau Burton, A&S ’17, and violinist Rougeau double as rappers, and evidently, they are quite good at it. Original song “How You Gonna Do Me Like That” showed off the two playing back and forth with verses. Interestingly, the original numbers at Saturday’s show might have gotten an even stronger response than the covers—defying conventional wisdom when playing for a crowd who isn’t necessarily familiar with you, it’s best to draw them in with other artists’ material. It was nice to see students connecting so well with the band’s own songwriting.

All things said, a little Juice before the three-hour game felt just right.