Home » Suffolk Downs And The End Of A Tradition 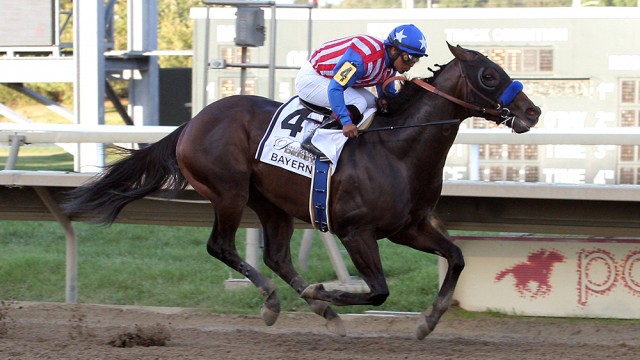 Suffolk Downs And The End Of A Tradition

I knew that I hadn’t won a dime.

My horse had finished somewhere in the middle of the pack as I watched from behind glass at the Meadowlands Racetrack in New Jersey. At least I wasn’t subject to gloating—my friend Nick hadn’t fared any better. Our girlfriends stood next to us, talking with each other, uninterested in our loss.

Bored after my bad luck, I tapped Nick’s shoulder and tilted my head at a strange character standing outside along the edge of the track—a mannish woman, or a womanish man with a straw hat on. We chuckled and tried to guess.

It was the middle of our last summer home before college, but we could already feel it waning—we were engaging in old home rituals, asking ourselves each time about when the last time would be. We ate too often at the local Chipotle, made extra efforts to get the “whole group” together, hung out in familiar basements, reminded each other of the jokes that we had accumulated over years of friendship, tried to disentangle what had taken a lifetime to knot.

But a visit to the racetrack—that was new.

Nick had wanted to go all summer, and we somehow convinced the girls to come with us. It felt strange to be experiencing something new when we had spent weeks rehashing what was old. The whole gambling thing—for which I had little taste—smacked of adulthood, which, in my eyes, was mostly marked by the potential to lose and be the only one directly taking a hit. It was no fun.

But here’s the thing: I was fascinated by horses. In that regard, the visit was bringing out the child in me, and I was thankful for the reprieve. Cowboy decorations on the walls of my boyhood bedroom. Riding my bike around the cul-de-sac, pretending it was a horse that all of the neighborhood kids envied. Watching Dances with Wolves repeatedly and wishing to live in a time when horses were the vehicles of choice.

I asked the others if they wanted to go down closer to the racetrack—ostensibly to identify the gender of the mysterious individual with the straw hat on. Ha ha ha, we all laughed. Inside, I was glad that I had convinced them to follow me. I wanted to be as close as possible to these unbelievable animals, to see their hooves pounding against the dirt, their tiny riders exhorting them to be faster, go faster, win.

I’ve never been to see the races at Suffolk Downs, and when news broke on Tuesday that Oct. 4 will be the last day for horseracing at Suffolk Downs, I regretted this deeply. After the state gambling commission approved a Wynn Resorts casino in Everett over a Mohegan Sun proposal that would have secured the future of racing at Suffolk Downs, management considered it the only recourse to prepare to end the races. My regret at having never yet visited the track, however, is muted by my wonderment at the pain those behind the scenes at Suffolk Downs must be undergoing.

Few would dedicate their lives to horses unless it was out of the deepest love. It is a livelihood, yes, and that is the most immediate loss, but time spent with a horse almost always leads to a bond—they have to say goodbye. I cannot know what it is like to spend my whole life caring for these simultaneously powerful and gentle creatures, but I know what I was doing midsummer before my freshman year of college as I stood on the precipice of some vague sense of adulthood:

I was leaning against the railing of the Meadowlands Racetrack like a child.

Nick tapped my shoulder, nodded toward the person with the straw hat on. “It’s a guy, I think,” he said.

I nodded with only token laughter, my bored unkindness forgotten—I was enthralled.

We stood next to each other, gripping  the railings, holding on to a tradition far older than any of our own.

edge of town suffolk downs
For Success, Boston Should Embrace Its Weirdness
The Honesty Inherent In An Unmade Bed