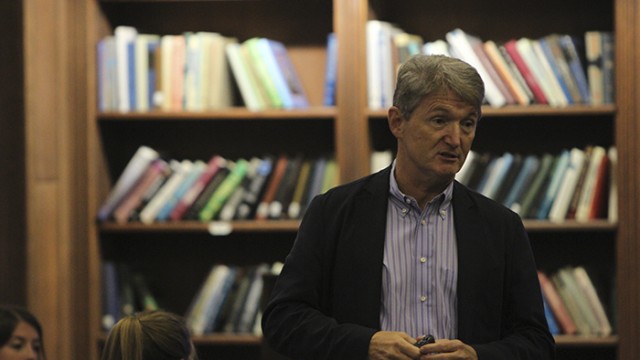 In the latest installment of the “Lunch with a Leader” series organized by the Winston Center for Leadership and Ethics, Bob Davis of Highland Capital Partners spoke in the Fulton Honors Library on Wednesday afternoon. Davis, a bestselling author, veteran of high-growth technology firms, and former board member of several public and private companies, spoke about his career experiences as well as life lessons he gleaned along the way.

Beginning with a short description of his educational background, Davis explained how his unique education at Northeastern University led him to the first segment of his career, which involved sales-heavy roles. Orphaned at a young age, he was tasked with paying his own way through his collegiate education. A co-op program offered during his undergraduate years allowed him to earn money to put toward tuition while allowing him to get experience at growing companies that have become modern giants, such as IBM and General Electric. After working in multiple sales jobs following his graduation, he became the vice president of sales at a digital storage company in Boston in the early 1990s. It was a constant sense of discomfort while in this role, however,  that led Davis to start an entrepreneurial venture.

“It was just a really uncomfortable place to be, but at that point I had a mortgage and kids,” he said. “It’s a tough thing to do when you’re in your mid-30s to jump away and do something different.” After working at the storage company for three years, Davis received a call from a friend working as an investor—someone who placed bets on the first few techs firms trying to master the concept of the Internet.

“My friend had found this technology down at Carnegie Mellon in Pittsburgh that was allowing people to search the web,” Davis said, recalling the steps that led to his first company in 1994. “There was a researcher that had invented this software … he didn’t want any part of it being a business. He wanted to sell it off, and my friend and I worked on buying this technology called Lycos.”

Using venture capital funding up front to purchase the technology, Davis founded Lycos, Inc. with his partner and worked to build the business as one of the pioneering websites helping early Internet users search the web.

“It was Google before Google existed,” he said. “It dominated the Internet by a large margin, with about 100 million people who visited the site every day.” After the company’s birth in 1995, Davis led Lycos to the fastest IPO in Nasdaq history just nine months later. It went on to exceed Wall Street analysts’ expectations for 22 straight quarters, becoming a global media entity before being sold to Spanish telecom giant Telefonica for $5.5 billion in late 2000, shortly before the Internet bubble burst and market values crashed.

“I sold the business for a whole lot of reasons, but most principally, I felt that the Internet at that point in time was grossly overvalued,” he said. “Right after the sale—we were really lucky with the timing—the stock market crashed.”

Although he agreed to serve as the chief executive officer of the newly formed Terra Lycos post-sale, Davis left after six months to pursue a career in venture capital at Highland Capital Partners. An early-stage-focused firm, Highland makes bets on young ideas with massive potential, with an average investment length of nine years.

Focusing the next portion of his talk on the work he has done and continues to do at Highland, Davis illuminated the daunting odds facing both investors and entrepreneurs looking to build businesses. Indicating that on average, 80 percent of startup ventures result in investors earning less return than they originally put in, he explained that the two successes out of every 10 investments are critical for venture capital firms. As an investor who knows these odds well, Davis looks for entrepreneurial ventures that have the potential to become big players in multibillion-dollar industries. Market analysis, however, does not rank anywhere close to the top of Davis’ most important factors in analyzing an entrepreneur’s pitch.

“Chemistry is what this is all about,” he said, indicating that a sincere relationship between the entrepreneur and the investor must be at the heart of a solid venture capital investment. He also spoke to the infectious energy and presence commanded by special entrepreneurs, saying they regularly create “magic moments” and help inject energy into any room they enter.

Davis closed his talk by emphasizing the opportunities abundant for students and young professionals to differentiate themselves and pursue their interests. Before offering advice to aspiring entrepreneurs in the room, he noted that while he hardly holds any regrets, one is that he waited a number of years before becoming an entrepreneur.

“The time to [start a business] is when you wake up in the morning and have that passion,” he said. Offering a mix of both life lessons and tools specific to success in venture capital and entrepreneurship, Davis urged attendees to make the best of themselves as well as their talents.