Home » Charlie Baker Will Be The Next Governor Of Massachusetts
Metro, Top Story, Politics

Charlie Baker Will Be The Next Governor Of Massachusetts

With over 99 percent of the state reporting, Baker registered 48.4 percent of the votes, compared to 46.6 for Coakley, 3.3 for Falchuk, and less than 1 percent each for Lively and McCormick. Falchuk’s tally of 3.3 percent in the general election means that the United Independent party is now an official political party, allowing it to hold primaries and put up legislative candidates for 2016.

Although she was hoping to continue former Governor Deval Patrick’s Democratic administration, Coakley ultimately lost the opportunity to become the first woman to be elected governor of Massachusetts. Despite a successful career as a two-term attorney general, Coakley was perhaps more often remembered during the gubernatorial campaign as the Democrat who lost the 2010 Senate race to Scott Brown.

During the campaign, Baker’s camp characterized the Republican candidate as the man who could turn around the state economy. His 10-year stint as CEO of Harvard Pilgrim, one of the state’s largest health care providers, resulted in an improbable financial turnaround of a failing company. In a predominantly liberal state, Baker campaigned with an eye on independents, relying on the undecided voters to propel him past Coakley.

With the overwhelming majority of Democrats initially supporting Coakley and various polls identifying her as the clear front runner since the beginning of the year, the Coakley camp was initially optimistic. After the primaries however, Baker began to slowly tighten the race and gained popularity among independents, in part due to his socially moderate views, which are more in line with the general population’s sensibilities. Given Coakley’s previous loss to a Republican underdog in the 2010 Senate race, Baker seemed primed to upset Coakley yet again down the stretch.

The Oct. 7 gubernatorial debate was a pivotal moment in the race, with sharp attacks issued by both Coakley and Baker. Coakley was accused of opposing reforms to the Massachusetts Department of Children and Families and was heavily criticized for her defense of the state in a 2010 lawsuit filed by a child welfare group. Coakley responded by attacking Baker for accepting a salary hike as the former CEO of Harvard Pilgrim while senior citizens were dropped from coverage.

After the debate, Baker hadn’t simply tightened the race, he had pulled in front of Coakley. Going into the election on Tuesday, Coakley was leading in only two of eight polls, and Baker held a commanding 3.7-point lead.

Baker ran on a moderately conservative agenda, in what he called the “Bill Weld mold,” Weld being the governor under whom Baker served as the Secretary of Health and Human Services. Baker is socially moderate, supporting abortion rights, gay marriage, and contraception availability through insurance. At the same time, he held fast to his fiscally conservative views, though promising Democrats that he would apply those policies with “compassion.”

While campaigning, Baker also appeared to repair the political profile that he damaged in his 2010 run for Governor. Instead of attempting to tap into the anger-fueled Tea Party, Baker conveyed a warmer image, appearing with his wife and daughter in public in an effort to appeal to Democrats, union leaders and urban voters, signaling that he would attempt to bridge the gap between the state’s typical constituencies. Instead of following a hard-nosed conservative approach to the economy, Baker refused to sign a no-new-taxes pledge, and abandoned the GOP’s calls for sweeping tax cuts and public employee layoffs.

Although Baker held a slim, but apparently decisive lead at midnight, Coakley wanted to be sure that the count was final, deciding not to concede the race, despite several news sources projecting a Baker victory.

“We believe it’s within 1 percent and there are still votes that haven’t been counted,” Doug Rubin, Coakley’s strategist said in an interview with The Boston Globe just after midnight. “We feel strongly that we should see all the votes counted before we make any decisions.”

Coakley conceded the race to Baker at 8:15 this morning over the phone, according to The Boston Globe.

While Baker agreed to the time extension for a final tally, he was confident in last night’s results. As it turned out, he was right to be. 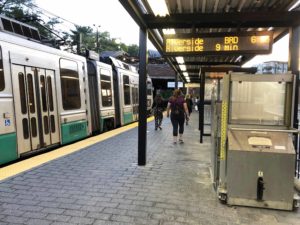