Home » Doing As The Romans Do
Column

Doing As The Romans Do

When one thinks of Rome, he or she generally envisions monuments like the Coliseum, cobble-stoned streets walked by blushing couples, bright colored Vespas whizzing through ancient roads, loud shows of colors and sounds in the piazzas, and of course, mouthwatering pizza, pasta, and gelato on every street corner. This romantic notion does not stray all too far from the truth. Rome is a magnificent city with a history and culture unparalleled to any other. Growing up there, however, I have gained a unique perspective on the city and experienced it much differently than a tourist would.

Although I was born in Los Angeles, I lived in Rome until age 8. A week after I was born, my parents decided to leave the country with which I share a birthday and move to Rome, where my father was born and had lived during his childhood.

I have pleasant memories of my childhood in Roma. I normally spent my weekends with my cousins at my grandfather’s ancient penthouse, which smelled of stale cigarettes (everyone in Rome smokes), old newspapers, strong coffee, and our stinky but loving bulldog, Artu. We spent our Sundays watching old American cartoons like Popeye and Tom and Jerry dubbed in Italian while eating Kinder treats and Nutella sandwiches. When I go back to Rome now and bite into a Kinder Pingui, it brings back nostalgic memories of my days at the family house and the dolce far niente—literally “sweet doing nothing”—of childhood.

If there’s one thing that’s truly unparalleled about Italy, it’s the food. No matter what the French might say, Italian food is the best in the world, and you will get an amazing, fresh meal whether you are at someone’s home, at a five-star restaurant, or at the cheap trattoria on the corner.

If you befriend some Italians, you will certainly enjoy yourself while visiting. Italians are generally very warm and friendly, and are especially good at two things: dressing well and having a good time. Unlike Americans, who are often more pragmatic, Italians take their time to enjoy things. For instance, the aperitivo is a common custom in Italy, which entails meeting some friends for drinks and a few appetizers before dinnertime (which is normally around 9 p.m. or later). Instead of drinking to get drunk, young Italians meet their friends for a glass of wine, a cigarette, a few pizzettas, and enjoy each other’s company.

There is quite a bit of crime in Rome, and people are always wary of pickpockets and thieves. Especially as an American, always keep an eye out for your things and be wary of prices, since some Italians will take advantage of what they perceive as American naivete.

Although Rome is a city, it is, in reality, more like a big village. Young adults live with their parents until their mid-20s since most go to public universities in their own cities, where they have to specialize right away in a specific field. They do not pay much attention to arts, sports, or extracurriculars in universities.

Unlike the U.S., where you are an American citizen the second you are born on American soil, you can only get citizenship in Italy if your parents have Italian nationality. The population is therefore mostly white and Roman Catholic. People are not nearly as open-minded as people in the U.S., and they are quick to judge.

What I love about the U.S. is that the national identity is founded on an ideology rather than a religion or a race. If you accept the principles of democracy, freedom, and tolerance, then you can be an American, no matter where your family comes from. These words may sound cliched and overused, but I can assure you that they are truer for the U.S. than for Italy.

Although I would probably not move there again, there are many things I cherish about Rome and its culture, and I would certainly encourage anyone to study abroad there. I have been very fortunate to be able to call both Rome and L.A. my homes, and enjoy visiting my Roman family during holiday breaks.

Being exposed to different cultures has opened my mind and allowed me to take in the best of both worlds, while examining the differences of each. Living in two countries has ignited my interest in foreign relations and diplomacy and inspired my passion for travelling and languages. I love learning about other cultures, and have been fortunate to travel as much as I have and to have learned many languages. In part because of my international experiences, I have chosen a political science major and plan to continue studying French and Spanish as well as go abroad next year. I still haven’t decided between Paris and Buenos Aires, but Paris’ proximity to Rome certainly wouldn’t hurt! 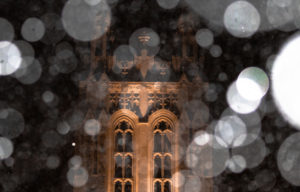