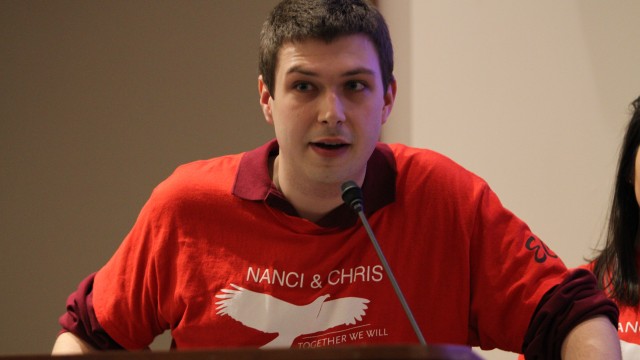 As early as next week, Chris Marchese, A&S ’15, could be reinstated as executive vice president of the Undergraduate Government of Boston College (UGBC). Student Assembly members will vote Sunday night, deciding whether Marchese will return to his former position on UGBC’s Executive Council. Marchese resigned in November after being placed on University probation and subsequently falling out of good standing with the administration—thus making him ineligible for holding the vice presidency of a student organization.

As Marchese’s probationary period expired at the end of last semester, he, along with Nanci Fiore-Chettiar, UGBC president and A&S ’15 and the rest of the organization, understood that there was the potential for him to be reinstalled to the Executive Council upon the start of the spring semester. Despite this knowledge, however, Marchese said that he spent Winter Break considering whether to return or not.

“I kept thinking about what it might be like to take a semester and do normal senior things and focus on my last semester of classes,” Marchese said. “The more I thought about it, the more I realized that not only do I want to come back, but that there’s so much more that I want to do with this semester than I originally thought. I think the one really good thing to come out of this whole process is a renewed focus, I think, on my part to see the bigger picture and the intentionality behind what UGBC does.”

After deciding that he did wish to return, Marchese and Fiore-Chettiar met with administrators to talk about Marchese’s potential future with the organization. The situation was then addressed by the Executive Council Monday night, with Marchese speaking to council members as well as Student Assembly committee chairs. Following that meeting, the Executive Council determined that it would nominate Marchese to return—taking into account administrators’ insights as well as UGBC members’ opinions on the issue.

“[The administrators] said ‘we fully support whatever it is you want to do—whatever you think is best for the organization and for students is what we think is best,’” Fiore-Chettiar said.

Marchese and Fiore-Chettiar noted that UGBC members had been given space to express their thoughts on Marchese’s potential return in the organization’s annual midyear review, and Marchese said that it would be up to the Student Assembly as to whether they wanted him to address them prior to their vote on Sunday.

If the Student Assembly is to vote in favor of Marchese’s reinstatement, the Office of Student Initiatives would provide final approval in the form of double-checking his eligibility pertaining to academic and conduct standing with the University. Fiore-Chettiar said that, while there are still UGBC constitutional rules to be abided by, Marchese would not be held to any formal additional standards or requirements for personal conduct upon his return.

“We don’t want to be policing Chris, that’s not our role as students or student leaders,” she said. “We appreciate the steps that he’s taking, but at the end of the day, that’s up to him and it was our decision … whether we felt like it would be a good fit.”

Marchese indicated that he has taken initiative himself to continually engage in reflection and conversations with individuals across campus, and that, since he was the one who put UGBC in its current position, he felt it was important for those initiatives to come from him. He also hopes to address his place at BC as more unified, not divided between being executive vice president at some points, and just a student at others.

“This is an opportunity for me to not only prove myself, but be a better student leader in the sense of it’s a second chance, but look at all that [I] still have to address,” he said. “I no longer think of myself as, ‘Chris, the student who is sometimes executive vice president,’ and then, ‘Chris who goes home.’ You can’t really turn off a switch of when you’re vice president and when you’re not vice president.”

Marchese said that he does not anticipate any problems transitioning back into his role—if he is in fact reinstalled as executive vice president—as he has kept track of the Student Assembly’s ongoing efforts. Fiore-Chettiar added that the student initiatives division would also likely see a smooth transition with Bourff returning to his initial position on the Executive Council.

Among the issues that Marchese would hope to address if given the chance to serve for a final semester on the Executive Council are better engaging students with UGBC and seeking more feedback on quality of student life, as well as adopting a campus free speech policy and continuing efforts to improve textbook affordability and mental health awareness.