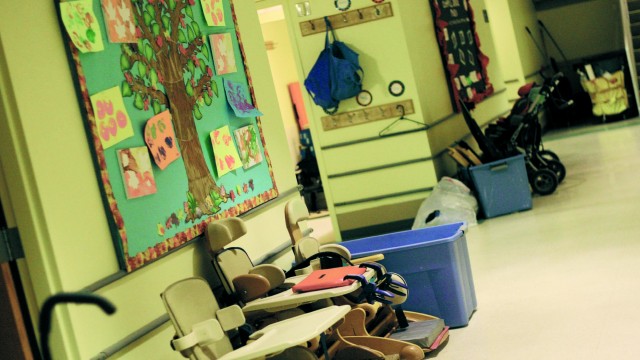 I’ve written many columns about the importance of music in my life—from the accessibility of Spotify to my unhealthy obsession with Taylor Swift. In the wake of last night’s Grammy Awards, we are reminded the true essence of music—how it makes us feel, develop, and come together.

Boston College’s Campion Hall, home to the Lynch School of Education, has become a place for me to experience the importance of music in one’s development. I joined the Buddy Program at the Campus School in the fall of my sophomore and first year at BC. This program allows me to be paired up with a student and spend an hour or more a week with him in the classroom. Little did I know that my relationship with my buddy, Christopher, and the small time commitment would become one of the defining aspects of my BC career thus far.

I was originally introduced to the Campus School through Christopher’s family—our grandmothers are dear friends and his mother has often raved about the incredible work and efforts of the school’s faculty to promote a healthy educational environment for Christopher to develop and hone his basic life skills. When I was younger, I was confused by Christopher’s inability to speak and his lack of mobility. When I asked my mom if he would ever talk or walk, she told me it was highly unlikely, rendering tears and frustration. As I grew older, I began to see Christopher less frequently, but every so often, I was painfully reminded of his inabilities.

I saw Christopher again on my first day as a student of BC, and I was astonished by his progress in communication and mobility.  Today, Christopher can walk and ride his red bike around Campion with me. Although he is still not able to talk, it does not stop him from communicating—he has developed signs for basic tasks and ideas such as “all done,” “sit,” and “my turn.”

The Campus School seeks to provide student-centered educational, therapeutic, and health care services to promote student growth in a stimulating environment, tailoring different approaches depending on the child’s specific needs. Not only does it offer hands-on, cognitive classroom learning, but also offers an array of special programming to better enhance students’ education and to facilitate growth in their life-skills. On days when I would visit Christopher, we would participate in music class, a form of educational therapy for all the campus school students, where music teacher Jeff would perform and run musical activities for the students.

In their study, “A Review of ‘Music and Movement’ Therapies for Children with Autism: Embodied Interventions for Multisystem Development,” Sudha M. Srinivasan and Anjana N. Bhat argue that musical training impacts various forms of development for children with Autism Spectrum Disorder (ASD) and other developmental disorders—similar to disorders seen in children at the Campus School.

Music-based therapies consist of about 12 percent of all autism interventions and 45 percent of all alternate treatment strategies used within school settings. Improvisational music therapy is an individualized, patient-centered approach to facilitate social engagement and verbal and non-verbal communication skills in children on the spectrum. In this approach, the therapist uses improvised, shared music-making experiences to connect with the student. Such moment-by-moment musical attunement of the therapist to the patient helps develop a medium of communication between the two, which in turn facilitates social skills such as turn taking, imitation, and joint attention as well as verbal communication skills.

Christopher usually spots the music cart making its way into his classroom about half an hour into our buddy time, at which point a smile shines brightly across his face. From there, Christopher becomes calm and at peace as we sit together and listen to songs. The administrator will sometimes have Christopher touch a set of wind chimes, where at the beginning of the year, he would rapidly bang against them to now softly and gently caress them to make a pleasing sound. It is evident through these types of programs that Christopher is receiving a well-rounded, cognitive education that is focused on improving all of his skills.

The experiences I have had working with Christopher in music class bring me back to the true meaning and origins of its purpose—to share and revel in an art form that also heals, both physically and developmentally. Music is often associated with the healing of emotions and while Christopher is motor-developing and relaxing in music class, I too have the opportunity to reflect on my own experiences as a Campus School volunteer. Christopher is my best friend at BC and I could not thank him enough for making my first year so fulfilling. It is through this music class that the true nature of musical sharing facilitates memory making, emotional healing, and personal and physical development.