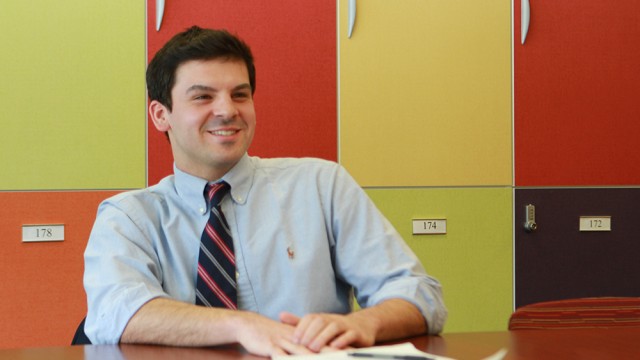 A look at Thomas Napoli’s time and experiences at Boston College ahead of this month’s UGBC presidential election.

Prior to the fall of 2013, the Undergraduate Government of Boston College (UGBC) ran the Mentoring Leadership Program (MLP) for freshmen to connect with experienced UGBC members and explore different divisions of the organization. A predecessor to the Undergraduate Leadership Academy (ULA) that UGBC now operates for similar purposes, freshman MLP participants would often go on to take senior leadership positions within UGBC, with the program’s final class—this year’s current juniors—being no exception.

One candidate in this year’s upcoming UGBC presidential election, however, took a decidedly different path in developing his leadership aspirations.

“I don’t think I ever thought about leadership as a freshman,” said Thomas Napoli, chair of UGBC’s Institutional Policy Review Committee and A&S ‘16. “All my friends were in MLP. I was doing service, teaching English, and participating in mock trial.”

Napoli arrived at BC to find a set of circumstances decidedly different than what he experienced during his four years at the Delbarton School in Morristown, New Jersey—he was no longer a student athlete, he had class with females for the first time, and he had more time freed up to pursue interests than at any point before in his educational career.

Napoli recalls a brief period of feeling overwhelmed during the outset of his freshman year due to the breadth of time and opportunities he now had in front of him. He emphasises his own growth as he began to acclimate to life in Chestnut Hill.

In the classroom, this ownership was first encapsulated by his pursuit of Arabic as a major. Originally looking toward a career in national defense with a particular interest in the Middle East, Napoli recalls a grueling five days per week class that constituted his first major challenge at BC.

While his major has now shifted to International Studies with concentrations in Economics and Political Science, Napoli’s long term interest in international affairs remains strong. While studying abroad in Kuwait this past summer, he had planned to write about national defense in the Middle East. However, his experiences interacting with local Kuwaitis led him to explore culture—specifically, gender roles and masculinity’s effect on women in Kuwait.

It is this interest in culture and human interaction that now drives the bulk of his career goals in a broader sense, as well as many of his current perspectives and interests within the BC community.

“Something instantly attracted me at BC about racial diversity—it’s something I hadn’t encountered before to this extent,” he said, referencing Delbarton’s culturally homogenous student body. “Joining FACES was a big step for me because it was a culmination of stepping out of my comfort zone and beginning to explore.”

At FACES, an organization committed to educating the student body on race, identity, and systems of power and privilege, Napoli serves as co-facilitator of Hall Talks, a program designed to foster dialogue about race at regular points throughout the academic year. Here, as with many of his pursuits at BC, gaining a leadership position was never his goal at the start but rather a natural manifestation of his work in the organization—in this case, for diversity issues on campus.

“If you’re so passionate about something, you want to be the person leading those causes,” Napoli said. His involvement in FACES has been alongside the current president of UGBC, Nanci Fiore-Chettiar, A&S ’15, whom Napoli identifies as his main role model throughout his time at BC.

“She’s the most interested and present person I’ve ever met in terms of being able to connect with people and find out what they are interested in,” he said. Napoli cites Fiore-Chettiar’s ability to find passion in others and help them explore their interests as what originally led the two to become friends and work together in a variety of roles on campus. It also spurred Napoli’s own views on how BC’s student body could be improved.

“The one thing that I saw at BC was how almost every single student I talked to had something that they were passionate about pursuing, and all in different formats,” he said, referencing a series of surveys and interviews he has conducted both leading up to his presidential campaign as well as his work on campus free expression.

Napoli describes this conundrum of students practicing apathy or having social fears of publicly pursuing their interests as what he most hopes to improve before his time at BC is up. Referencing a survey he administered in which he found that roughly only 60 percent of current students believe they have the ability to influence University policy and decision-making, he optimistically looks toward a time in which students will feel confident in exploring their passions and trying to improve the world around them—both at BC and afterward.

Addressing the task of bringing these passions out of BC students, Napoli pointed to another role model of his: Woodrow Wilson. Oft-maligned for his blunders with the League of Nations and no-war efforts following World War I, Napoli believes the former U.S. president gets a bad rap, expressing respect for his idealistic pursuit of goals that would have made the world a better place.

“I’m idealistic,” Napoli admitted. “But I think it’s okay to be idealistic if you have concrete action plans for how to achieve your goals. From my experience, you never end up achieving what you want right away, but it’s the idea of shooting for the moon and ending up near the stars.”

While he may never have predicted being in this position during the fall of 2012, Napoli’s current presidential run coincides with a common theme throughout his time at BC. Continuing an ambitious streak, he’s pursued positions of leadership in all the areas he has been passionate about. With his goals of greater student expression at the forefront, he now finds himself one of three students vying for UGBC’s top office.