Home » Not Easy Being Green: MIT Student Sets Out To Track Green Line With App
Metro, Top Story, The T

Not Easy Being Green: MIT Student Sets Out To Track Green Line With App

With 87,420 average weekday entries to the Green Line alone, hundreds of thousands of Boston’s commuters, residents, and students rely on timely MBTA service every day. As the T has seen an incredible number of delays and cancellations in the wake of Boston’s winter storms, MIT senior Alex Grinman hopes his new app will help Bostonians navigate the seemingly unreliable system.

Grinman’s app, Greenline, provides real-time tracking of all MBTA Green Line trains. The app utilizes GPS tracking features to tell users exactly how far a train is from his or her current location, which will allow passengers to manage their schedules with delays.

Grinman, a computer science and math major at MIT, created his first build for Greenline in early January. Greenline is Grinman’s latest creation, but it is not the only software he has worked on, as he interned at tech giants Microsoft and KAYAK over the past five years. In addition to his professional experience, Grinman credits time with Blade LLC., a startup incubator in Boston’s Fort Point section, and his high school curriculum for his expertise in computer science. Currently, Grinman has constructed three functioning apps—all of which are featured on the MBTA’s Rider Tools website—that he developed during his time at nearby Brookline High School.

Greenline pulls location data from the MBTA website and determines the train’s longitude and latitude to figure out the train’s exact location. Each MBTA train has a GPS device implemented within its cars, and broadcasts the data to the MBTA’s servers. Greenline features a polished and easy user-interface in which passengers can see both inbound and outbound green line trains as well as the stations on the route. Grinman hopes to add an estimated time of arrival feature to the app in the future, but does cite its difficulties. “Currently the MBTA provides ETAs, however it’s pretty unreliable due to stoplights and weather factors,” he said.

Similar to location features on other apps and social media, like Snapchat and Facebook, Greenline features the ability to share a train with other users. The software utilizes Twitter or a link to share location among users, allowing others to see the time, location, and specific train that is being ridden on.

This GPS tracking is extremely reliable above ground. Once the trains enters into the Green Line’s below-ground stations, the MBTA no longer provides its location. Although much of the outbound stations are above ground, the majority of Green Line passengers get on at the inner city’s below ground stations, making this information disparity especially problematic, according to the MBTA. Grinman is confident that this information gap will be overcome and the MBTA will release this information in the future when it installs Automatic Vehicle Identifiers (AVIs) in tunnels, to benefit riders who use the app. These AVIs are expected to be installed by the end of the winter.

Through Greenline, users are provided real-time locations for all train stations and cars on the Green Line. In addition, users can view the entire route path with all the stops on the map as well as have the ability to save stops that they desire as favorites. The app also has an option for users to receive official MBTA service alerts.

With the Green Line averaging over 230,000 riders a day, Grinman believes that his new app will be extremely beneficial to college students as well as those that work in the city who frequent the Green Line.

“If you just look out your window in the city you see people standing waiting for the train, my hope is to have people wait inside and track using the app and can walk outside and hop on the train,” he said.

This past week, due to record snowfall, the Green Line experienced a slew of cancellations and delays that left riders stranded in the cold and waiting for shuttle buses. Grinman created Greenline because of problems similar to this—he felt that there was a specific need to provide MBTA information to riders and felt that the Green Line schedule was unreliable compared to others.

“Schedules are kind of useless because the trains don’t follow them,” Grinman said. “The red, orange, and blue lines don’t have as much uncertainty, but with the Green Line it’s another story.”

Previously Green Line tracking data was not available to developers, but the MBTA decided to release the real-time information this past October. Greenline uses this information to feature service alerts for the MBTA green line through Twitter.

“Currently Greenline is passing updates through Twitter, as I feel it’s the quickest way to get information that users depend on,” Grinman said.

Although there still remain a few minor quirks to resolve, Grinman hopes to launch Greenline on the iOS app store in the near future. 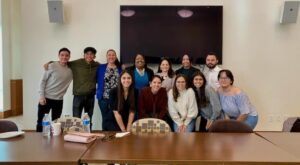