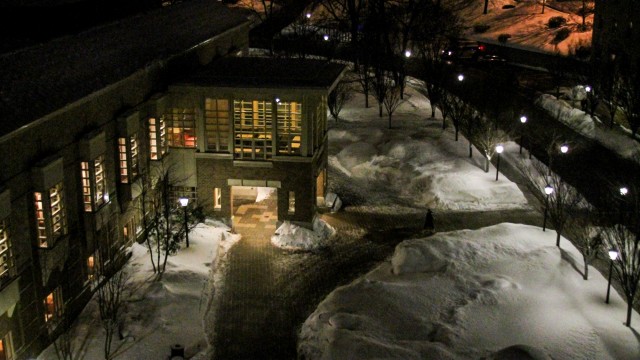 Updated Feb. 16, 1:37 a.m.: Boston College students and faculty were urged to take shelter for a little under three hours on Thursday evening, this emergency state enacted after the BCPD received a muffled phone call from an anonymous caller about a bomb threat in the dining halls.

The initial University notification to evacuate Lower Dining was sent at 7:38 p.m. on Thursday, Feb. 12, with instruction for students and faculty to stay in class buildings and residence halls. All University dining halls were evacuated half an hour from the initial notification.

The Boston Police Department bomb squad was called to campus to investigate the threat. Once the bomb squad had searched all of the operational dining halls and it was determined that there was no credible threat, an all-clear notice was issued just after 10 p.m.

The all-clear notice gave those on campus the go ahead to resume regular activities. University spokesman Jack Dunn indicated that there will be an ongoing investigation with local law enforcement regarding the bomb threat.

According to information released by BCPD in its public blotter, an officer filed a report regarding the bomb threat at 6:35 p.m. on Thursday. An alert went out to the BC community at 7:38 p.m., over an hour after the reported time.

“The response to the scene, initial evacuation of Lower Dining, and searching the area by BCPD officers was the immediate priority,” said chief of BCPD and director of public safety John King in an email. “As the call recording was further assessed, decisions were made to make the alert notifications, as well as request resources from the Boston and Newton police.”

On Thursday, BC Dining employee Erin Ducey, A&S ’16, said that the manager at Lower told Addie’s Loft and catering employees to evacuate around 7:30 p.m., and that the managers were not aware of exactly what was going on. Employees remained outside of Lower for several minutes before moving to Hillside in Maloney Hall where they eventually received the emergency alert over text and email.

They were then also evacuated from Maloney, according to Ducey. She said that dining employees were told there would be no Late Night dining on campus Thursday night.

A live stream of the dining hall was available until just before 8 p.m., depicting the empty dining area still partially set for dinner. At 8:10 p.m., the University sent out a second notice from the BCPD, requesting students and staff evacuate all dining halls on campus until further notice.

A third alert sent at 9:01 p.m. requested that those on campus continue to avoid dining halls as a precaution as the investigation continued. This request remained in effect until 10:06 p.m., when the all-clear notice was issued. BC dining halls remained closed for the rest of the day Thursday, with dining locations set to reopen according to regular hours Friday.

“We have well-trained police and administrators and an established emergency protocol and notification system that serves us well and positions us to address emergency situations such as we experienced last evening,” Executive Vice President Michael Lochhead said in an email to the BC community sent Friday afternoon. “Moving forward, we will continue to review our policies and procedures to make sure that we are as effective as possible in ensuring the safety and well-being of all members of the BC community.”

Kerry Cronin, a fellow in the philosophy department, was in the middle of hosting her annual speech on dating culture when the bomb alert went off. There were several hundred students at the talk in Devlin 008 when the alert was sent out, but very few people chose to leave. Cronin acknowledged the bomb threat, and then opted to continue her talk.

The bomb threat destroyed the playful, humorous mood that was in the room during the dating lecture, Eric Zhang, CSOM ’18, said in an email. He said he immediately texted his family to assure them that everything was fine—he was then unsure about the truth in his comment. Cronin’s composure distracted the students from the bomb threat, and Zhang said that he admired her for maintaining an optimistic and positive atmosphere during the rest of the talk.

“The first thing I thought of was that we were all pretty far from Lower, but that wasn’t really too reassuring either,” he said in an email. “I stayed calm and remained in Devlin 008, feeling anxious and nervous as the rest of the room buzzed. Still, I was more just disappointed by the fact that this would hang like a dark cloud over the rest of Professor Cronin’s talk.”

BCPD lower
A Discussion On Campus Hook-Up Culture
College Hockey For Dummies: An Texan’s Journey Inside The Rink