Jim Christian barked orders into the ear of Olivier Hanlan, who held the ball at the 3-point line with his back facing the Boston College bench. The repetitive words could not be made out, but the message was clear—create something, anything.

Hanlan responded immediately, jabbing at the defender with a few quick dribbles along the baseline, stopping on a dime, and popping a fadeaway jumper.

BC’s matchup against No. 10 Notre Dame was reminiscent of the Louisville game back in January. Despite the incredibly efficient shooting of the Fighting Irish and Aaron Brown’s best efforts to recreate his season-high against the Cards earlier in the season, the ways in which the Eagles met the high octane offenses are light years apart.

At the Louisville press conference, Rick Pitino heaped praise upon Christian for his coaching ability. Christian had thrown a wrinkle on the zone defense in an attempt to scramble the Cardinals’ offense, but Terry Rozier, Montrezl Harrell, and Chris Jones proved to be too red-hot for BC to stop.

Fast forward to the post-Notre Dame press conferences, where all praise was piled upon individual players. With both teams lined up in man-to-man defense, the game became a contest of player versus player, and all Christian could do was urge his best one to take over and compete with the Irish every step of the way.

An analysis of offense versus offense becomes a complete mismatch in favor of the Fighting Irish, for more than a few reasons.

What can only be described as wizardry at times, Grant’s playing style is defined as a creator in every sense of the word.

Combining the offensive prowess of Hanlan with the jack-of-all-trades playing style of Pat Heckmann, Grant spearheads the steamroller that is ND’s deadly offense. In the span of only a few minutes—a few trips up the court and back—Grant did just about everything a player can do on the court. The sequence starts with a forceful rejection of a Brown layup on one end, in which he comes from behind to shove the ball—and Brown—away from the rim.

On the ensuing ND offensive trip, Grant rises above everyone else to snatch up a rebound off a missed three by Pat Connaughton, only to dish it back to Connaughton for a make and one of his 11 assists on the day. And to finish off his one man show with an exclamation point, he makes a drive through traffic and a contested finish at the rim look easy.

“Grant just made some easy plays, got guys shots, and didn’t worry about his numbers,” said Notre Dame head coach Mike Brey. “He was such a man out there.”

Perhaps Grant’s most remarkable characteristic is his vision—an incredible sixth-sense awareness of what is happening on every inch of the court at every second. A loose rebound up in the air might seem like a 50-50 ball, until Grant arrives at the scene to swat the ball on a perfect line to an open player on the other side of the court. When he’s on the ball, he’s even more dangerous. Grant has the combination of wherewithal, skill, and confidence to create a play out of thin air. A quick spin off of a defender suddenly becomes a bullet that lands in the hand of a teammate, who then knocks down the high percentage shot.

While Grant sticks out as a man among boys, the supporting cast of the Irish is nothing to forget about. Pat Connaughton, an incredibly gifted two sport athlete, only had eight points, but cannot be left alone on the 3-point line. Demetrius Jackson took over the offense when Grant handed it off to him, topping off his team-leading 15-point night with a forceful alley-oop late in the second. Bonzie Colson and Zach Auguste tore apart the Eagles interior defense from the start of the game, and six different players for the Irish finished in double figures as Grant spread the wealth around.

The Eagles offense flowed just a little differently against Notre Dame than it had all season.

Most notable from the game was the absence of a few key players. While Will Magarity sat in street clothes on the bench—sidelined for a second straight game—Heckmann and Dimitri Batten were in the game but were never really involved. The duo finished with five points each and only two rebounds and one assist between them, leaving all of the offensive responsibilities in the hands of Dennis Clifford, Brown, and Hanlan.

Clifford delivered one of his best offensive games of the season, finishing with 17 points, six rebounds, and four assists. He has scored more this season—19 against UMass Lowell and Maine—and he had a double-double against Harvard, but against Notre Dame, he looked solid and composed with the ball in his hands.

“People forget he hasn’t played in two years,” Christian said. “The last couple of weeks he has really started to compete and has gotten better.”

The statistic that sticks out the most for Clifford is the four assists, a season high. In most games, defenses give Clifford a lot of space when he gets the ball away from the paint. Especially against Syracuse, the seven-footer would turn too slowly, or put up a rushed jump shot when he had more time to examine the play. The composure he showed against ND led to those four assists, as he got the ball up away from the quick hands of the guards and took his time picking his passes and shots.

Leading scorer Brown produced a much more up-and-down game than Clifford did. Far out-shooting anyone on the court, he attacked the rim constantly, but doesn’t have the finishing ability of Hanlan to put up huge numbers.

“Aaron did a great job of getting to the basket, but I think sometimes he goes too deep, and he has to start making some other plays,” Christian said.

In the end, Jackson played better defense on Hanlan than Clifford did against Colson or Auguste, Grant proved why he is one of the best players in the country, and Christian needed a lot more fadeaway jumpers from Hanlan for the Eagles to compete with the highly efficient offensive machine of the Fighting Irish. 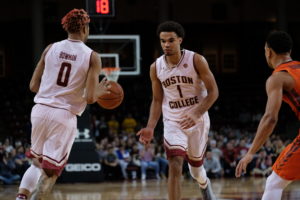 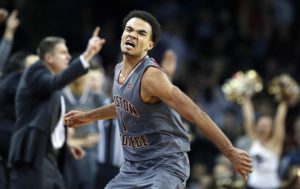