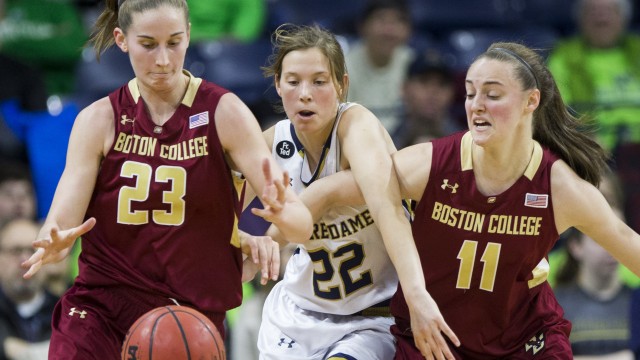 Boston College women’s basketball had high hopes this season. After going 11-1 in its non-conference slate, the team’s goals of being competitive in the ACC and making it to the NCAA Tournament seemed within reach. After entering ACC play and being plagued game after game with turnovers, fouls, and missed baskets, the team’s dream became impossible to achieve. But the Eagles never stopped fighting. During their final regular-season game, the Eagles hoped to steal a little luck from the Fighting Irish to end the season on a high note.

The Eagles had the tools to pull off the unlikely upset with their inside-out game that highlights 3-point superstars Kelly Hughes and Nicole Boudreau and a standout freshman at the post, Mariella Fasoula. But BC needed more than skill: it needed luck. The Fighting Irish, however, kept all the luck and to themselves. The Eagles (14-15, 2-14 Atlantic Coast) lost to the No. 2 Notre Dame Fighting Irish (28-1, 16-0) in a respectable 70-58 defeat.

Throughout the first quarter, BC struggled to contend with a powerful ND team. With a sellout crowd behind them, the Fighting Irish had a commanding 22-4 lead at the first media timeout. But the Eagles were not discouraged. BC managed to cut the lead to 25-12 after one quarter behind the efforts of Fasoula, and it did not stop there.

With a jumper, a few free throws, and a 3-pointer by Hughes, the Eagles managed to get within 10 points of the Fighting Irish and only trailed 32-22 halfway through the quarter. In the final four minutes, however, ND went on an 8-0 run before heading into the locker room at halftime with a 42-24 lead.

The Fighting Irish came out cold, and the Eagles took advantage, going on a 6-0 run to decrease the lead to 42-30 in the first three minutes of the half. With the crowd demanding a timeout be called, ND did everything it could to end BC’s momentum. The Eagles’ defense crumbled under pressure and allowed the Fighting Irish to go on a run of their own, increasing their lead to 49-30 with less than five minutes left in the quarter.

With Fasoula on the bench with four fouls, the Eagles struggled on both ends of the court. BC continued to miss shots and commit fouls, handing the Fighting Irish a 55-35 lead going into the final quarter. If the Eagles could not have ND’s luck, they were borrowing some of the team’s fight.

Hughes and Martina Mossetti had a combined five points in the first half. BC needed to fight on the offensive end to get back into the game. To open the quarter, Hughes and Mossetti worked the ball around the arc, trying to get the Fighting Irish’s zone defense off balance. Mossetti saw a hole and took advantage, firing a long-range two. But ND continued to fight back. The teams battled back and forth as the Eagles tried to slowly chip away at the Fighting Irish’s lead.

With 5:54 left in the game, the Irish were up 62-45. The Eagles took a huge blow when Fasoula was called for her fifth and final foul. As she walked back to the bench, the Eagles’ disappointment was evident, but they kept fighting. Mosetti and Hughes continually worked the ball and set up their teammates in order to give the Fighting Irish a run for their money.

Senior Boudreau scored her first basket of her final regular-season game as an Eagle with less than four minutes left to make it a 64-50 game. But by then, the game was already decided. BC played without fear because a loss was inevitable. This allowed the team to successfully play offensively for the first time all afternoon. Lead by Hughes and Mossetti, who scored 21 points collectively in the second half, the Eagles walked away with a respectable loss against the top-ACC team.

Although the Eagles did not achieve their goals and finished the regular season with a .483 win percentage, this is a game to be proud of. They may have had 17 turnovers and 19 fouls, but they also had 30 rebounds and eight steals. Whether BC was down by 10 or 22, the team never gave up the fight. It may not have been the ACC upset the team was looking for all season, but a 70-58 loss to the No. 2 team in the country is not too bad. And, it should give the team positive vibes heading into the ACC Tournament in Greensboro, N.C.