Melissa Sutherland, assistant professor of the William F. Connell School of Nursing (CSON) recently received a grant from the Eunice Kennedy Shriver National Institute of Child Health and Human Development (NICHD), a division within the National Institute of Health (NIH) to study interpersonal violence screening among college women.  She previously worked as a nurse practitioner at a sexually transmitted disease clinic and wrote her doctoral dissertation on the link between child sexual abuse and women’s sexual decision-making. She continues to research this association and the psychological coping mechanisms women resort to after being abused. During the summer of 2010, she interviewed women about violence they had experienced in previous relationships and their sexual decisions as a part of her research.

Sutherland began studying the prevalence of violence against women in college when a mentor suggested that violence might be the missing link in her research.

“When you become aware of the issue of violence, it’s like an awakening,” Sutherland said. “You realize how many people are affected”

Sutherland is primarily concerned with how violence affects the health of young women because it can manifest itself in a myriad of physical and psychological problems such as injuries, sexually transmitted infections, anxiety, depression, and unplanned pregnancy.

“The goal is to gain the knowledge necessary to develop interventions, which promote intimate partner violence and sexual violence screening in college health centers,” Sutherland said.

“We need to know more about women’s experience in college health settings,” Sutherland said. “National organizations recommend screenings, and we know if people aren’t asked about sexual or intimate partner violence they are less likely to disclose. We need to ask in a supportive way and use the information to connect women to resources if they have been victims.”

Her research is relevant to teaching on research ethics, cultural and health, global burden of disease, and gender-based violence, and she hopes that her theoretical-driven research will inform stakeholders and improve screening violence in college health centers. 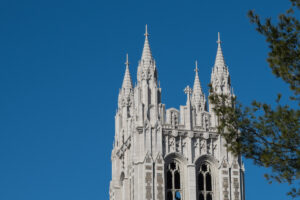