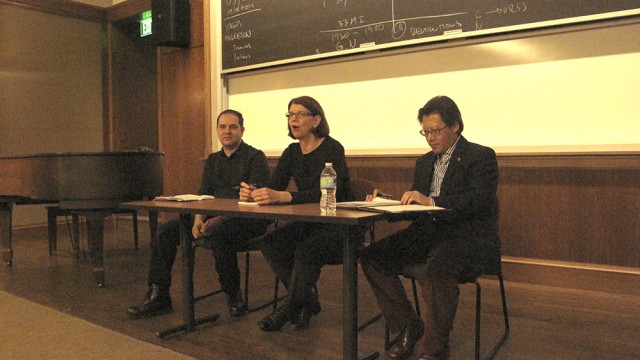 Professor Martha Bayles of Boston College’s College of Arts and Sciences honors department brought together leaders within the film industry for a panel discussion on Feb. 23 about how America is internationally perceived. She was joined by Teng Jimeng, a translator and consultant to Chinese film directors, and Alex Franklin, head of Film and Television at Partos Company and a former studio executive at several film companies.

In January, Bayles released her book Through a Screen Darkly: Popular Culture, Public Diplomacy, and America’s Image Abroad. She explores America’s image abroad and the potentially surprising lack of desirability in America’s freedom and democracy, as well as the distorted portrayals of these qualities among America’s cultural exports.

Bayles moderated the panel—Hollywood and Beijing: Beyond the Bottom Line—about the real cost of making movies in China and America. Franklin focused on the impacts of a growing box office and voiced the intentions of Hollywood while Jimeng represented those of China, particularly Beijing.

Franklin noted that within the last few decades, success in the movie industry within the United States does not carry as much weight as it did in the past because of the recent growth of the international box office.

“Over the last generation, everything has been turned upside down,” Franklin said. “Being a success in the United States doesn’t even really matter as much.”
Franklin listed various statistics highlighting the astronomical growth of international box offices in comparison to the stagnant American interest. He explained that China is increasing in box office tickets by about one third per year and has increased by 300 percent in the past five years, while America has increased 3 percent in the past 10 years.

Since Hollywood’s primary interest is to increase revenue and profits, Franklin said that America is now seen as just another market, and this shift in perspectives among Hollywood producers and film-makers has changed the types of films being made to cater to the larger international audience.

“Hollywood studios now focus the bulk of their time, their energy, and their resources on big budget action films and comic book movies,” Franklin said. “What is happening in China, or Russia, or India, or all of these other countries is we’re sort of just trying to figure out the bare minimum we can do to pass censorship and make money.”

Both speakers later addressed the concept of censorship within the film industry, with respect to politics and the rights of Americans. Franklin and Jimeng both agreed that international censorship is an obstacle for Hollywood. However, though Franklin expressed compliance on Hollywood’s end to abide by China’s censors for the time being, Jimeng pushed for America to work around these barriers.

“If you run into a problem, evade it,” Jimeng said multiple times. “Please the crowd, not the censors.”

Jiimeng also offered a clear incentive for China with the increased interaction through films to unfold in the development of a bridge between America and China, within the industry and consequently in culture, ideology, and modes of business. He expressed hopes of the heightened commerce in China to reveal an equally profitable outcome for the Chinese. Jimeng sees the movement as a two-way track where Hollywood is moving into China as China is trying to build a market in the U.S., he said.

“I remain optimistic with the co-production mode for this emerging industry,” Jimeng said.

Bayles then posed the question of whether or not the U.S. and China can collaborate to create a joint, successful film industry, as well as whether or not they should and the requirements necessary of each partner if this were to occur. Franklin believed it should happen and is what the two countries are currently attempting to do.

He explained that there needs to be more trust on both sides in order for this to happen. But, he said Hollywood is still hesitant of such a relationship, partly because of cultural differences, language barriers, and the potential for China to back out or not fully invest in the industry. Jimeng agrees that the two countries should attempt to create this joint industry and believes they can after building a trusting relationship.

Jimeng explained that building this trust will help merge the two industries, countries, and cultures and stimulate profitable outcomes for both sides, where businesses and everyday citizens can benefit from the film industry.

“We have people traveling back and forth [between the U.S. and China],” Jimeng said. “What we need right now is cross-cultural people with cross-cultural, multicultural backgrounds.”