Home » Hanlan’s Supporting Cast Returns To Hunt Down The Wolfpack

Hanlan’s Supporting Cast Returns To Hunt Down The Wolfpack

“It was like that dream you have sometimes when you’re running, and the guy’s chasing you, and you want to run real fast, and you seem like you’re going as slow as molasses. That’s kind of where we seemed today.”

BC head coach Jim Christian leads his two stars of the game, Hanlan, and Heckmann, into the room. They sit behind their respective microphones, their expressions indifferent. None of them has forgotten that their team still rests at the bottom of the ACC, tied with Virginia Tech at 2-14 in conference play. Even if BC wins its final two games, the season will still likely go down as an overall disappointment.

And yet, given that they just wiped the floor with a talented North Carolina State squad, Christian could not be more pleased.

“Here’s the thing that impresses me,” he says. “I inherited a group of seniors. In late February, losing nine in a row, I don’t know how many groups of seniors, you know, would have rolled over and just played it out. We’ve been competing, we still practice with a lot of spirit, they play hard every single night, and they fully deserve to win this game.”

One by one Mark Gottfried pointed, and four red figures rose. They traipsed down the sidelines single file, sinking down together as they reached the scorer’s table. A whistle blew on the floor a minute later, and the four moved out on the court. A fifth man ran in behind to join them, making it a full-squad change.

The five North Carolina State (17-12, 8-8 ACC) starters trudged back to their seats on the bench, heads bowed from the weight of numerous missed shots and opportunities. Gottfried, the Wolfpack’s helpless coach, watched as the fresh five mirrored the others: they picked up an occasional easy basket in the paint, but primarily took difficult, contested shots while also allowing Boston College (10-18, 2-14 ACC) to have its way on the other end.

Gottfried tried another full-squad substitution three minutes later in the second half, but it made no difference. His team had no “zip,” as he called it after the game. The Wolfpack began to chip away at the lead in the final minutes, but the Eagles never let it slip down to single digits, closing out a 79-63 win seemingly in routine fashion. Of course, no part of this game was routine for a team that has seen more feet of snow on its home turf than wins in 2015.

One of the best and most exciting parts about ACC basketball is that no team is safe. A new upset seems to occur on a weekly basis. It’s something that carries into the postseason and eventually tournament play, giving March its Madness and (thus far) preventing a billion-dollar check from abandoning the recesses of Warren Buffett’s pocket.

BC pulled off a huge upset last year against then-No. 1 Syracuse. NC State had one of its own earlier this season, when it took down then-No. 2 Duke on the road by double-digits, spoiling the Blue Devils’ quest for an undefeated season. The Wolfpack almost did it again exactly a month later, falling to No. 2 Virginia by four.

By beating NC State—a team with Tournament aspirations—the Eagles got an upset win, and probably their best since they knocked off Providence way back in early December. But, unlike some upsets, this game wasn’t one that “came out of nowhere.”

BC has lost three regulation ACC games by six points or fewer, and has had six second half leads. The Eagles have shown promise all season in spurts, playing well for five minutes, 15 minutes, and even 35 minutes. On Saturday, they played all 40.

Dimitri Batten got it started, hitting two early threes to put the team up 11-2. Patrick Heckmann came out of the gate dishing the basketball, tallying a career-high seven assists for the second time in the past two weeks—and they all came in the first half. He also finished with 14 points. Garland Owens played a quality 23 minutes, going 3-of-5 with a couple of terrific slams. Dennis Clifford looked confident inside and showed some range, hitting a couple jumpers on his way to a 10-point afternoon.

What did all these players have in common? None of them is named Olivier Hanlan. The guard has been playing at an other-worldly level for the past several weeks. He leads all major conferences with 22.6 points per game in conference play and has launched himself into outside contention for ACC Player of the Year. And yet, no matter how many 30-point games Hanlan could muster, it’s made no difference without help. Against NC State, that help finally arrived.

The Eagles as a team consistently outperformed NC State in almost every category in the first half. They out-rebounded by nine, chalked up five more assists, and committed five fewer fouls. They had a great performance beyond the arc (5-of-8, compared to NC State’s 2-of-8) and had great success finishing at the rim. An Aaron Brown 3-point play capped off a 9-2 BC run to finish the half, placing the team ahead of NC State by 17. Everything finally clicked.

Of course, NC State did little to help itself all game. The team made poor passes and settled for mediocre shots most of the afternoon. The only time the Wolfpack outplayed BC was in the final minutes of the game, after both Clifford and Heckmann had fouled out.

“I thought we had absolutely nothing in the tank,” Gottfried said. “[It was] disappointing, for us. We had an emotional win [against No. 15 North Carolina], but we had a hangover … In a perfect storm, they played great, and we played like we had cement boots on.” 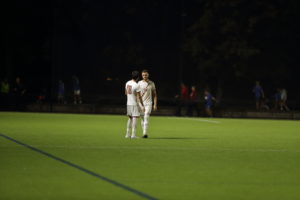 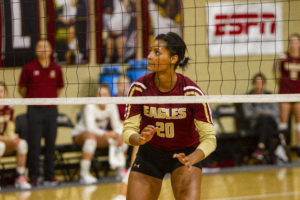