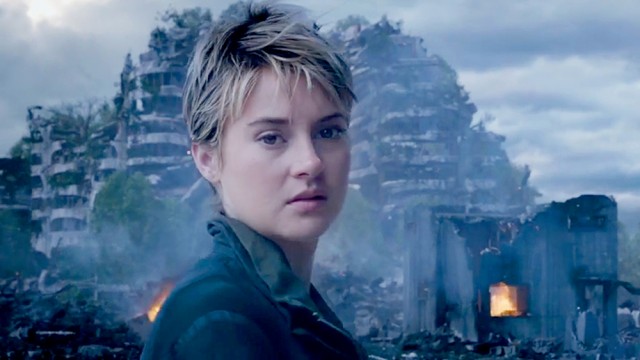 When compared to The Hunger Games or even Twilight, The Divergent Series is having a rough time finding the devoted fan base and strong reception that other book-to-film teen drama adaptations have enjoyed. Both of the series’ releases seemed to have slipped under the radar, garnering nowhere near the opening weekend box-office revenue of their fantasy genre counterparts or recent releases like Fifty Shades of Grey. Insurgent, the sequel to Divergent, recycles its predecessor’s plot structure and atmosphere, and does very little to make up for its contrived, regurgitated storyline.

As the story goes, a few days after the attack on the Abnegation faction, one of five factions that Chicago has been split into, Tris, Four, Caleb, and Peter are hiding out from Jeanine, the leader of the Erudite faction. Jeanine has found a box, apparently made by the founders of the enclosed city, that she believes holds the answer to the Divergent problem. Divergents are people that fit into multiple factions and therefore do should belong to any particular faction. To her dismay, only one Divergent can open this box (I really wonder who it’s going to be). Jeanine orders that all Divergents be hunted down and captured and our heroes are put on the run again. The crew goes to the Factionless sector of the city and prepares for civil war between the factions and factionless.

Insurgent loses itself in a tangled mess of lackluster secondary characters. Shailene Woodley’s Tris is compelling, forceful, and makes for a great lead, but almost every other character is mistakable for another or useless altogether. Miles Teller physically stands out from the rest of his male counterparts because of his recent success in Whiplash, but Jai Courtney, Ansel Elgort, and Theo James could have swapped characters in the middle of the film and few viewers probably would have noticed. Insurgent assumes the viewer has intimate knowledge concerning characters’ motivations or how consequential losing them would be to the rest of the film.

It’s understandable that the producers and casting crew would want a reputable actress to play Jeanine, but Kate Winslet just looks like she’s reading her lines off of a cue-card. Being power thirsty is, on its own, a poor quality for a villain. She has no redeemable quality and Winslet’s performance lacks intrigue. Naomi Watts makes an appearance as the leader of the Factionless, but, again, attaching a big Hollywood actress’s name in the series didn’t add any of the substance the film is missing. The only character that holds any emotional weight in Insurgent is Tris, which makes the audience careless to the general development of the plot.

The Divergent Series, being an adaptation of Veronica Roth’s novels, has some avoidable issues crossing over between the films and the books. The overarching themes of both are extremely heavy-handed and unoriginal. Explaining social divisions by “characteristics” rather than social class fails in hiding the series’ thinly veiled political message. Similar metaphors for socioeconomics have already been made in J.K. Rowling’s Harry Potter series, as well as Lois Lowry’s The Giver. The series generally feels like a cheaper Hunger Games, with perhaps a better lead performance from Woodley. It offers virtually no originality and, watching it, the viewer is likely to recall other, better series of similar nature throughout the film.

Visually, Insurgent actually has something going for itself. The rustic set designs and props in the shadier parts of the city pop off the screen beautifully while the sleeker, more refined administrative building foil the poorer parts of Chicago, its unapologetic setting, really well. The film’s weaponry, on the other hand, looks like overdone squirt guns. Characters’ garb meshes seamlessly with the environment. Winslet’s fashionable and bright apparel really shines in comparison to all the grime of the rest of the film’s settings. But, again, these components of the film mirror those of The Hunger Games almost perfectly—and when they don’t, it’s because The Divergent Series feels cheaper.

The Divergent Series should never have been made into film. It’s just another adaptation of a popular teen novel series that offers no new material for the film industry. The only notable performance and component of the series is Shailene Woodley, but she doesn’t make up for the mediocre nature of the films or the series’ story at all. The Divergent Series feels like it was designed entirely as a Hollywood cash-cow, with very little emotion or substance to it. Even when it comes to raking in cash, the series is doing poorly. With still one installment left to go, The Divergent Series is already postured to fade into the dark recesses of the fantasy flop adaptations of the last decade.

movie reviews insurgent shailene woodley
Alex Carpenter Wins Patty Kazmaier Award
If You Were A Planet, Which One Would You Be?