Emmys and A-listers and murders, oh my! HBO’s highly regarded Big Little Lies returned for a second season on June 9, much to the delight of the show’s viewers, who at one point were led to believe a second season wasn’t in the books. Literally, Liane Moriarty, who wrote the book of the same title, only wrote one book that more or less wraps up at the same place as Season One—with the shocking murder of one of Monterey’s finest.

This leaves one huge question hanging over the perfectly combed heads of the elite helicopter moms of Monterey: Should there even be a second season?

“What Have They Done?,” the first episode of the second season, does more than up its expenses to address this question. Meryl Streep joined the cast—which already consisted of Nicole Kidman, Reese Witherspoon, Zoё Kravitz, Laura Dern, and Shailene Woodley—as the grieving mother of the deceased. Streep brings with her matronly Mary Louise a slew of new questions to be answered in typical hush-hush Monterey style.

Bordering on neurosis at parts of the episode, Streep summons her demons and her acting chops for the enigmatic character: During a dinner scene with her son’s widow (Kidman) and her grandchildren, Mary Louise lets out a guttural scream in an unruly expression of grief. Given her son’s wrongdoings in season one—which included domestic abuse and rape—it will be intriguing to see Mary Louise’s perception of her angel son change (or, perhaps more interestingly, stay the same) if she uncovers his dark deeds.

While the whole cast of leading women gave impeccable performances in their unique roles during the first season, it was really Kidman that fearlessly waded into the darkness to give the show its emotional depth. Season Two sees Kidman, who won an Emmy for her performance in the first season, transform her resilient Celeste from victim to victor in her battle against her abusive husband. Kidman portrays this transformation with the same virtuosity she brought to the role in the first season, rowing ceaselessly against the changing tides of grief and relief in nightmare sequences and hushed conversations alike.

Bonnie (Kravitz), like Celeste, finds herself still reeling from the events of the previous season in the first episode. In a conversation with Madeline (Witherspoon), Bonnie opens up about her feelings of remorse and regret, wishing she had an opportunity to tell the truth. Although closed off upon first reappearance, it’s likely Bonnie’s guilt will rise to the surface of the murky Monterey waters as the plot develops in later episodes.

As with any HBO show, production value is not to be understated. Big Little Lies carefully crafts the idyllic image of life on Northern California’s scenic coast with stunning cinematography and an eclectic soundtrack. The camera seamlessly slips in and out of focus as Jane dances wildly to Sufjan Stevens’ serene “Mystery of Love,” flailing her limbs and hopping through the sand against the picturesque scene of waves crashing on the shore in one standout scene from the first episode.

Music selection again heightens emotion during a memory montage of loving scenes from Celeste and Perry’s marriage, over which Cassandra Wilson’s celestial cover of Neil Young’s “Harvest Moon” plays calmly. Both scenes artistically clue viewers into the the characters’ mixed feelings without disrupting the action of the plot, creating a balance between emotion and action that makes the characters seem like flesh and blood people.

Season One relied heavily on a fragmented plotline: The first episode told viewers a murder had been committed, but it didn’t reveal the victim or the killer. The following episodes drew out this murder-mystery frenzy by detailing some of the more vapid drama of the town, from 6 year olds’ birthday parties to risqué community theatre productions. Within the minds of viewers (well, at least viewers who didn’t read the book), invitation snubs and scandalous extramarital affairs became potential murder motives.

Season Two grants viewers no such frivolity. Celeste grieves and finally breathes, Bonnie contemplates her actions, and Mary Louise digs and digs and digs. Let’s hope the show’s writers gave her something good to dig up. 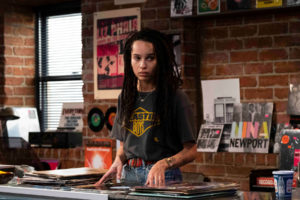