“A single to center.” Seemingly one of the simplest, least threatening sentences that could be uttered in baseball. On Wednesday, Donovan Casey led off the second inning with one of these seemingly innocent base hits. It turned out to be more than that as Casey got the offense started and set the tone for an excellent game from his team.

Coming into the game with a three-game hitting streak, Casey made sure that he extended it in his first at-bat of the game. He was immediately driven in by sophomore catcher Nick Sciortino to give the Boston College Eagles (8-13, 1-7 ACC) a 1-0 lead over the Holy Cross Crusaders (5-14)—a lead from which the Eagles never looked back.

Casey and Sciortino got the offense started in the top of the second, but the team really got going in the top of the third, igniting a rally that chased Holy Cross starter, Phil Reese, from the game. Jake Palomaki walked to start off the rally and Michael Strem added a single to set the table for star junior Chris Shaw. With two outs and two on, Shaw doubled to right center to knock in Palomaki and Stream. Casey came through with another single, this time sending home Shaw to give the Eagles a 4-0 lead coming out of the third.

The Eagles’ pitching staff made the most of the offense’s performance, turning in its own stellar effort. Starting pitcher Eric Stone went three innings strong, allowing only one hit, one walk, and striking out two. Stone’s effort, along with Casey’s igniting offense, set a strong tone for the rest of the Eagles team, particularly the bullpen, which continued Stone’s brilliance. The Eagles’ bullpen did a great job of maintaining the silence of the Crusaders’ bats. Through the first seven innings, the Eagles only allowed three baserunners—two by walks and one on a single. Head coach Mike Gambino mixed and matched with his bullpen, bringing in Jesse Adams, Brian Rapp, Nick Poore, and Kyle Dunster. None of them allowed a hit and they preserved the 4-0 lead heading into the eighth inning before turning the pitching duties over to freshman Carmen Giampetruzzi.

Heading into the eighth inning, the Holy Cross offense had shown no signs of life whatsoever, failing to advance a single runner into scoring position through the game’s first seven innings. Their bats woke up in the eighth, however, as the Crusaders took advantage of the freshman Giampetruzzi’s inexperience. The capitalization on his inexperience came after the inning started off extremely well for him. He retired the first two Crusaders he faced on a groundout and flyout, respectively. It seemed like an inning exactly the same as the first seven for the Eagles pitching staff—one of absolute ease and efficiency.

Walks often ruin solid outings for pitchers—tonight, that was a huge problem for Giampetruzzi. The freshman pitcher issued a walk and the rest of the inning went downhill from there. After that, the Crusaders finally got on the scoreboard behind an RBI double from junior Bobby Indeglia followed by an RBI single from sophomore Josh Hassell. These runs from Holy Cross forced Gambino to go to the bullpen once again and bring in junior John Nicklas. Nicklas faced trouble of his own, giving up a single and throwing a wild pitch, before he forced a groundout to escape from the eighth with no more damage. In the ninth, Nicklas thwarted the Crusaders again and retired the side in 1-2-3 fashion to wrap up the victory for the Eagles.

BC’s effort on Wednesday at the New England Sports Complex showed how the team’s various components can come together in beautiful fashion to secure a win. Excellent pitching, clutch hitting, sound defensive plays, and large contributions from freshmen are essential components for any team to play at their best. That is exactly what the Eagles were on Wednesday—their best. 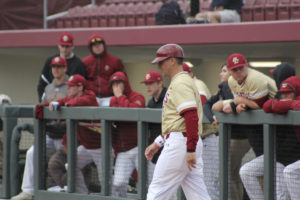 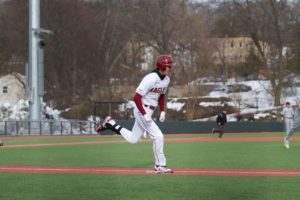