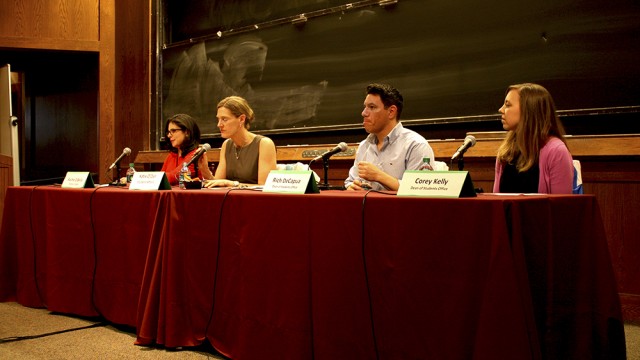 In a panel staged for Concerned About Rape Education (C.A.R.E.) Week, four members of the administration detailed Boston College’s sexual assault policy and what students involved in the process might expect—a question recently teased out by a pending case by a former student on the mismanagement of his sexual assault case. Around 50 people (about 10 of whom were male) attended to hear administrators clarify the University’s policy in handling sexual assault cases.

“We know sexual assault affects students here at BC,” DiBella said. “Every corner of our University has taken a stand about actions and attitudes that do contribute to sexual violence.”

O’Dair, in her role as BC’s Title IX coordinator, oversees the University’s sexual assault efforts and policy. Last May, the U.S. Department of Education released a list of colleges and universities that violate Title IX. BC was not included on the list, although local schools like Boston University and Harvard University were. O’Dair outlined the resources available to students who choose to come forward about a sexual assault. Students can receive counseling from a confidential source, speak with someone in the Women’s Resource Center, file an internal statement to the Office of the Dean of Students (DOS) within the conduct system, or pursue criminal charges with the BCPD.

The decision to take any of these routes, or to take none at all, is left in the hands of the student, O’Dair said. If she does recognize a name of someone against whom previous charges have been filed, she may be legally obligated to take action. Although she has not yet had to do that, she said, the University would have to act if there were a repeat offender or if a particularly problematic location on campus were found.

If a student chooses to pursue the conduct process, DeCapua explained, a no-contact order would be enacted between the two students, and an investigation would begin. The DOS works with DiBella as an advocate and with Kelly, who works with an investigator and with the students in question to develop a report based on the testimony of both students in question—the students are brought in separately for questioning. Following that, the appropriate sanction is issued, including, but not limited to, probation, suspension, or dismissal. Once the results are decided, the students are invited into the DOS separately, so that there is no interaction between the witnesses.

“Everyone is met with separately,” Kelly said. “I think in our experience that has worked out best for everyone involved.”

The purpose of the conduct process is to gather enough information about the situation to make as informed and fair of a decision as possible. The administrators involved work hard to make sure the students going through the process have all of the support they need, Kelly said.She noted that being a survivor is an experience that can only be defined by that person.

The difficulty in adjudicating these cases is that they are generally very complex. They often involve alcohol, and a situation between two people in which the interaction was consensual and then became non consensual. In situations like this, the student may not have known that consent was withdrawn, DeCapua said.

Often, it takes a process of decision making before a student decides to come forward with more information.

“As often as possible, we want to make sure students feel that they are given that agency,” DiBella said. “But we also want to keep the community safe.”