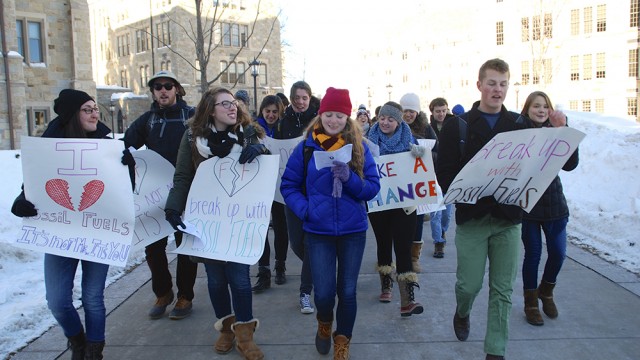 In a unanimous decision, the Board of Student Organizations of the Undergraduate Government of Boston College (UGBC) voted to approve Climate Justice at BC (CJBC) to become a registered student organization on Sunday night, moving the group one step closer in a battle for University recognition that has spanned over the past year. Later this week, the Office of Student Involvement will vote to decide the future of the climate organization.

A year ago, the members of Climate Justice went by a different name, BC Fossil Free. Under that title, they applied to be a recognized campus group, but were rejected on several grounds, said Dhara Bhatt, vice president of Student Organizations and CSOM ’15. First, the organization had off-campus events that did not enhance the BC community. In addition, there was a lack of proper leadership and event coordination structure. The club’s initial presentation did not show the organization to be an educational forum for students, Bhatt said.

“We decided they would be deferred until they could change their format to bring it back to BC and see how they could benefit students here,” Bhatt said. “After this, they rebranded under the name Climate Justice and changed their mission statement and reapplied.”

To become a registered student organization, interested students must first fill out an application on OrgSync, Then, Bhatt emails the primary contact a template for the group’s constitution. The board then chooses whether or not the group qualifies for an interview. Most groups are brought in, she said, and Student Organizations then holds a vote. Next, Bhatt meets with Jean Yoder, the associate director of leadership development in the Office of Student Involvement. Yoder performs a background check that entails checking to see if BC can accommodate the club, as well as seeing if the presidents are in good standing. The group then meets with Yoder to do onboarding, which consists of finalizing various aspects of the club, like the constitution. Due to all of the administrative steps currently mandated in a club’s creation, the process takes about a month.

It is great to have the complete support of UGBC, Zack Muzdakis, a member of Climate Justice and A&S ’17, said. However, Climate Justice is still waiting for the approval of the administration.

“We’re hopeful, definitely, but we still have to wait a little bit longer,” he said.

Since the time BC Fossil Free was under examination to become a registered organization, the group has enacted more educational aspects about the ethics of climate justice and why it is necessary, in addition to holding rallies for divestment.

The group currently exists under a flat structure—each member of the group is equal, and anyone can get involved in an event. This structure allows more people to get involved, Muzdakis said, but UGBC contends that a more strict executive structure is necessary.

“We’ve really been able to do a lot with that structure,” Muzdakis said.