Home » A New Way To Seafood 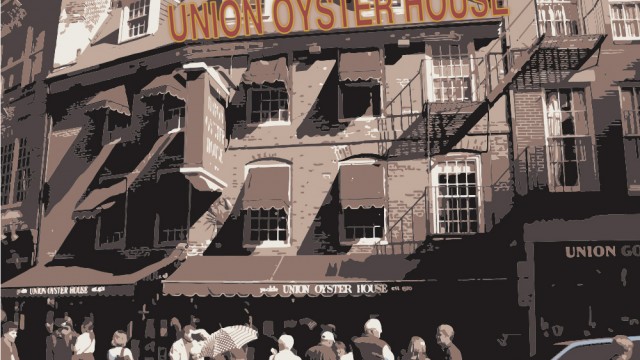 A New Way To Seafood

When I first heard of the Union Oyster House, I obviously assumed it was a Civil War-themed hotel for down-on-their-luck oysters.

My heart was thoroughly warmed thinking of those poor jobless oysters being able to find shelter and nourishment under the roof of the Union Oyster House. General Grant would be proud that his heroic legacy extended to caring for our unfortunate sea brethren. I carried this assumption with me for some time, until my mother suggested eating there.

“But ma, no self-respecting hotel would let us waltz in and eat the tenants like that,” I told her.

What followed was a very prolonged and exceptionally awkward discussion regarding my perception of the world and my general intelligence. During this discussion, it was impressed on me that oysters are incapable of checking into hotels or holding steady jobs. This revelation shocked me to the core. But let’s not get hungup on that. What matters is that I learned the true nature of the Oyster House and visited the establishment on a sunny Boston afternoon.

Now, I’m no food critic, but I can assure you that the fried clams were both fried and, in fact, clams, which beautifully complemented my glass of ice water and provided a delicate and yet tasteful treat for my palate. To quote renowned food critic Shackles “Greasy Tooth” Huntington, “The food was good, yeah, it was pretty good.”

On a more interesting note than the food was the atmosphere. The wooden booths and dim-lighting recall the colonial background of the institution. The large lobster tank and the nautical decorations add to the restaurant’s oceanic atmosphere. By the end of the meal I was ready to hop on my trusty stallion and go off to cross the Delaware.

Another reason to visit The Oyster House is to see the “Kennedy Booth.” A sign overhead sets this large booth apart as the booth used by the famous Massachusetts clan for lunch meetings. I could practically picture those besuited politicians hunched over the table, plotting and munching on some clams.

As I sat there, eating my seafood and looking around the restaurant, I decided that this would be my favorite seafood restaurant from here on out. I would plant my flag on The Union Oyster House and defend it forever as the best place for seafood in Boston. I decided this because the world is black and white and all forms of compromise are inadequate. It’s always best to be unreasonable, defensive, and fundamentally furious about every choice, decision, and phenomenon in this world. At least that’s the way I see it.

In a final and overall viewing, it is clear to see that The Union Oyster House is a Boston institution and is, in many ways, representative of the city as a whole. Both the restaurant and the city hold roots in the Revolution and have histories filled with poignant Americana. If you spend any time in Boston and don’t visit this restaurant, I am forced to believe that you must be some sort of lobster-back sympathizing hate-filled monster, and I don’t want to believe that.

For all of you fun-loving Boston College students, I’d recommend taking an afternoon to venture down to this classic restaurant. What else are you doing with your life? Nothing. That’s what. So hop on the train and get moving. Eat some oysters, munch on some clams, pretend you’re a rich Massachusetts politician, a good time will be had by all.

food Union Oyster House
‘Us Kids’ Is A Bold, Psychedelic Step Ahead For Small Talk
BC Professor Argues Dzhokhar Tsarnaev Trial Appears Far From Over