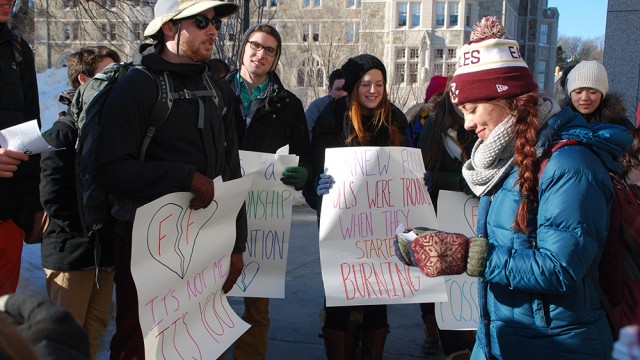 The Undergraduate Government of Boston College (UGBC) voted Sunday to approve Climate Justice at Boston College (CJBC) as a registered student organization. This vote positions Climate Justice one step away from gaining full legitimacy as a club. The Office of Student Involvement (OSI) is set to decide the future of the group this week.

CJBC previously applied for recognition under a different name, BC Fossil Free. The group was rejected by the Student Assembly on grounds that the events it hosted were often off-campus (interestingly, it is not possible to host events on campus if your group is not registered) and did not enhance the University community. In addition, Fossil Free was turned down because it lacked an organized leadership structure. Climate Justice’s members believes that a horizontal leadership structure works best for their club, and they still do not have a designated president or vice president. This approach is consistent with many national activist groups; it is not, however not an approach allowed for BC clubs and organizations.

When students take tours of BC, they are told that if they cannot find a club for something they are passionate about, they can start one. The students in Climate Justice are clearly passionate, yet the vast web of rules required of student organizations have kept them from a formal status on campus. The reason why is disputed—Climate Justice members will posit that it is because the University does not like their cause, while members of UGBC say that Climate Justice did not previously adhere to their standards to be registered with the University. At least on the part of UGBC, this has changed. To pass the first standard to become a recognized student organization, Climate Justice has incorporated more educational activities and events.

The demands BC puts on clubs that wish to become registered organizations are lengthy, though not altogether unreasonable: clubs must have a power structure, have at least 10 members, understand hazing rules, and align with the University’s mission, among other requirements. With that, club members must complete a certain number of leadership training hours throughout the year and avoid trouble with the disciplinary system to maintain their registered status and their University funding.

Though Climate Justice’s potential and likely incorporation into the fold of registered organizations could redirect their energy to more bureaucratic matters—they will now be tied to the University through funding and can be disciplined as a group rather than individually—it is ultimately a useful move on the part of both the club and the administration. Climate Justice has attempted a radical route to push for the school’s divestment in fossil fuel companies for some time. Its members have held an unregistered rally and vigil, resulting in several of its members receiving disciplinary probation. Their activity with the administration is disputed, but has been unfruitful thus far in achieving any divestment-related goals. As a registered group, Climate Justice will be put into a system of strong conduct requirements, but will also be given several sanctioned forums for its views. If the club finds itself making even less progress within the system, then by all means, it can leave this structure and pursue its aims through unstructured demonstration. Navigating the University’s administrative structure could ultimately allow for more productive interactions between Climate Justice and the administration, and if the group is approved, we might see a stronger sense of understanding on both sides of the debate.