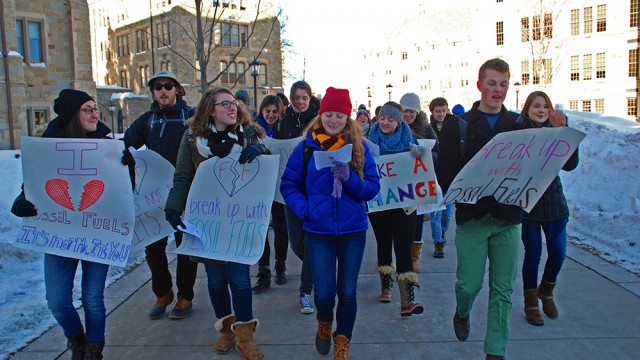 LTE: A Letter On Climate Justice From VPSA Barb Jones

Whether it is in examining racial inequality or climate change, Boston College supports the exploration of issues through intellectual discourse and open dialogue. We emphasize the capacity of our students to sort through competing ideas and formulate opinions on their own without a prescribed opinion or action from the University. Issues around climate, sustainability, and divestment are among a multitude of world issues that engage the attention of our students.

For the past two years, a group of students calling themselves Climate Justice at BC has requested that the University divest from fossil fuels. Members of the group have met with a number of university representatives, including the president, vice president of student affairs, and chief investment officer. Throughout these meetings, students have been told that the University is opposed to divestment on the grounds that the BC endowment exists to advance the academic mission of the University and is not a tool to promote social or political change. They have also been told that the University’s focus is on promoting sustainability efforts that reduce its carbon footprint, and educating its students in the area of environmental conservation. The Climate Justice group has also had a number of meetings with Student Affairs staff related to University events and policies. Unfortunately, these conversations have not always been accurately presented on their website and social media channels, or in their remarks to the media.

One issue that has been misrepresented is the question of group recognition. The fact is, the Climate Justice group applied for registered student organization status twice in the past two years, but did not meet the criteria of approval as determined by the student-elected Undergraduate Government of Boston College (UGBC).  Most colleges and universities have some form of registration or recognition policy for student organizations that is very similar to the one used at BC.

This year, when several members of the Climate Justice group chose to stage an unauthorized march through campus, they were informed of the University’s policies and told that if they decided to participate they could be found in violation of BC’s Code of Conduct. Before the march began, the students were once again told that their protest was in violation of University policies and could result in conduct action. The students chose to proceed with the march.  As a result, four students received disciplinary sanction. None was suspended from the University.  Their sanctions ranged from a “warning” to “probation.” It has long been the right of colleges and universities to determine the time, place, and manner of events held on their campuses, so as to help ensure the safety and wellbeing of their students as well the educational functions of the institution.

The Climate Justice group applied for a permit again for an on-campus rally on Sunday, April 12. They indicated that they were requesting a permit for “faculty from area universities.” As a private university, BC does not permit outside groups to use the campus for rallies and demonstrations. Accordingly, the student who applied for the program was given three options:

1) Postpone the event to see if the group’s latest registration status would be approved at the UGBC meeting on April 12, which would make them eligible for final approval as a registered student organization.

2) Partner with a student group that already has registered status to receive authorization for a permit that would allow BC community members to participate in the rally.

3) Host the rally in a public location that was contiguous to the campus, which the University would help facilitate with appropriate authorities.

Unfortunately, the group decided not to engage in any of these options and communicated publicly only that they were “denied a permit.”

As a university, BC vigorously sponsors learning and public discussion on climate change and related issues. Our environmental studies program is robust, interdisciplinary, and growing, engaging natural scientists, social scientists, and theologians, as well as students from many disciplines. And our Department of Earth and Environmental Science carries the University’s scholarly interests and social commitments in its name. Our public programming—held for the benefit of the greater community—is equally vital, recently featuring a presentation on “Religion and the Roots of Climate Change Denial,” as well as a public discussion with environmental activist and writer Bill McKibben.

We believe, as a university, that we have an obligation to our students to engage with them on all matters of societal, cultural or intellectual interest. We hope that when our students are moved to activism, they choose to do so in the honest and transparent manner that expected of all BC students.

2 COMMENTS ON THIS POST To “LTE: A Letter On Climate Justice From VPSA Barb Jones”