Home » BC Will Be Considered For Boston 2024 Olympic Plans
Metro, Top Story

BC Will Be Considered For Boston 2024 Olympic Plans

According to Olympic officials, Boston College is currently involved in early discussions to host events for Boston’s Olympic bid, after previously being excluded due to potential technical operational issues with Conte Forum.

Thomas Keady, BC’s vice president of government and community relations, was recently named to Boston 2024’s board of directors. Keady had previously served as a campaign adviser to Mayor Martin J. Walsh, WCAS ’09, and was asked by Walsh to join the organization hoping to bring the Olympic Games to Boston, and was encouraged to participate by University President Rev. William P. Leahy, S.J.

“Boston 2024 has top college officials on our leadership team, including the recent addition of BC government and community relations vice-president Tom Keady, who was named to our board of directors,” Boston 2024 Executive Vice President Erin Murphy said in an email to The Heights. “Our engagement with the universities is just getting started.”

As a board member, Keady will meet twice a year to vote on major policy initiatives, and will offer advice through a set of subcommittees, which are expected to be finalized in the upcoming weeks. The new 30-member board includes big names like John Fish, who is the chairman of Boston 2024 as well as the chair on the BC Board of Trustees, and Boston sports icons Larry Bird and David Ortiz. Keady and Gloria Larson, president of Bentley University, are the only two college administrators currently represented on the board.

Although Keady is currently a BC official, he doesn’t believe his new role on the board will be limited to representing the University in the bid process.

“I don’t think my role is to just represent BC,” Keady said. “I think they were looking for someone who understands Boston, coming out of the higher ranked community.”

Boston 2024 is currently visiting various colleges and universities to perform a facilities assessment, where 70 to 75 percent of Olympic venues plan to be held. The private organization has already visited Harvard, Boston University, and Northeastern University, Keady said, and is also looking at other small, local schools. Boston 2024 planners also presented to various university presidents and government relations officials at the Association of Independent Colleges & Universities in Massachusetts annual meeting on Thursday, looking to gain local support from institutions.

BC was originally left out of Olympic plans because the United States Olympic Committee (USOC) saw potential technical operational issues with Conte Forum, said John Fitzgerald, a senior project manager from the Boston Redevelopment Authority and the liaison between the city and the Boston 2024 Organizing Committee, in an email in February.

“Right now, we are under consideration like most major institutions in Boston,” Keady said. “The USOC and IOC [International Olympic Committee] are going to be doing tours, and we are going to have to be part of that discussion. What I think makes Conte Forum viable for some event is because it’s air conditioned, and we have all the bells and whistles for TV conditions that people would need to broadcast the events across the world.”

Keady explained that besides Conte Forum, Alumni Stadium, Shea Field, and Athletics fields on the Newton Campus will potentially be considered as a part of Boston 2024’s assessment of university venues. He also believes that the dorms at BC could play a part in the potential Games, due to their success hosting major events in the past. In 2004, the Democratic National Convention was held in Boston, and BC housed a majority of the secret service on campus for 10 days.

Boston 2024 called for a statewide referendum on the bid in November 2016, and said it would not pursue a bid unless a majority of voters statewide and within Boston. One public poll in March suggested that only 36 percent of local voters backed Boston’s Olympic bid. But approval for Boston’s Olympic bid has recently increased to 46.6 percent, according to a recent poll by The Boston Globe.

Looking forward, Boston 2024 is expected to add members to its board of trustees, and continue to collaborate with local colleges and universities during its facilities assessment phase in the coming weeks.

“It’s an exciting time if you’re a college or university in Massachusetts with the possibility of the Olympics coming,” said Keady. 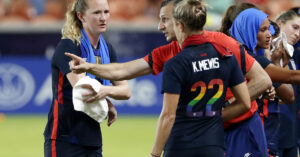