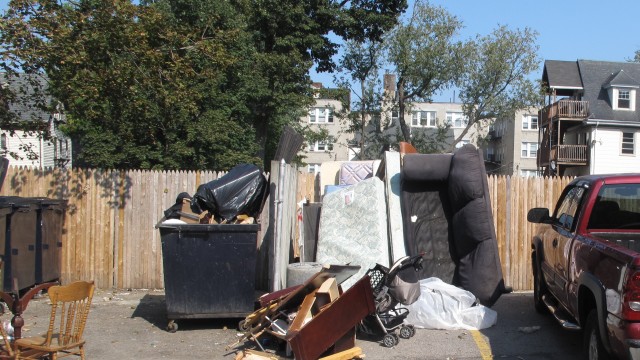 This past Tuesday was an all too familiar event for the residents of Boston: Allston Christmas.

Taking place on Sept. 1 every year, Allston Christmas marks the calendar date that ends and begins almost all off-campus housing lease agreements for students in the city of Boston. The holiday’s name refers to all of the used items, ranging from swivel chairs to mattresses, that are left on the curbside by former residents who have no use for them in their next home.

Neighborhoods that serve as a home to mostly college students, such as Mission Hill and Allston, were covered in heaps of miscellaneous belongings from previous tenants on Tuesday afternoon. The sidewalk was adorned with a vast variety of discarded household items ranging from crock pots, lava lamps, and pairs of crutches to glowing neon flamingo signs. Inspectional Services Department (ISD) officials were walking the streets, inspecting items left out and ticketing those trying to leave items that are ineligible to be recycled.

Aside from the trash and treasure, the streets were also congested with intense traffic due to the high volume of vehicles unloading new furniture. Tenants left traffic cones in the street for their roommates to pull up to upon arrival, and vehicles that managed to pass weaved between U-Hauls and other moving trucks that were parked along the curbside. The neighborhoods of Brighton and Allston were crowded with everything from Toyotas to bedside tables.

The city required residents looking to reserve parking spaces for moving trucks to file Street Occupancy Permits. In addition, there were temporary roadblocks on the side streets off of Brighton Ave., leading passing traffic to be redirected to Commonwealth Ave. Due to the increased traffic, travel times on the B-line were greatly extended to accommodate all of the redirected vehicles.

Allston Christmas exemplifies the saying that one person’s trash is another’s treasure, and this was exactly the case for Boston College Junior Griffin Connolly, MCAS ’17, and his housemates. “We found absolutely everything we needed for our house on the curbside: from TV stands, to couches, to desks for our bedrooms,” Connolly said.

Even the BU students who live on campus took strolls through the Allston neighborhoods, looking for anything and everything. Since all undergraduate students began class the very next day, streets located directly west of Boston University like Gardner and Pratt Street were especially full with trash and unwanted furniture.

“Days like today make me happy that I get to live on campus,” noted Amber Henriquez, a sophomore at Boston University who scavenged the streets in hope of a good find.

Though new tenants look to Allston Christmas as an exciting day, it has recently functioned as an opportunity for highlighting concerns among local neighborhoods. An arising problem that Mayor Martin J. Walsh, WCAS ’09, has sought to resolve is the prevalence of landlords and tenants who do not follow Boston housing codes. The City of Boston’s Inspectional Service Department had officials lining the streets to answer questions and address any concerns that new tenants may pose about the housing codes and violations.

According to a post via the Mayor’s twitter account on Aug. 27, Walsh warned the city about the potential concerns of the day. “Landlords & tenants must properly dispose of trash and large items,” the tweet read. “PWD will be out and ticketing.”

City officials are also trying to work with landlords and universities to spread out the move-in week, rather than cramming it into a small 48-hour window, according to The Boston Globe. Not only is it a stressful and exhausting time for incoming students, but it’s also overwhelming for the landlords who must refurbish their houses for new tenants.

Some students in Allston moved in while their landlord was still doing some repairs such as painting walls, rebuffing the floors, and filling in ceiling cracks.

There have been incidents involved after moving in which tenants realized their smoke detectors and carbon monoxide detectors had no batteries, gas stove tops malfunctioned, and outlets were left uncovered—all of which pose danger and are housing code violations.

Boston’s biggest move-in day came at an unwelcome time this year for BC students. Unlike Northeastern and BU, BC started its academic calendar before Sept. 1 this year. “This is a problem because approximately one-fifth of the school’s students don’t have a place to live when classes begin,” Connolly said.

As for next year’s big holiday, Connolly is looking to play a minimal role after the fatigue and stress of this year. “The hope is to get items out on Craigslist a few months in advance to be sold or at least given away, its better than having them thrown on the street to be weathered away,” he said.