Welcome To O-Line University: Class of 2015

Aspiring NFL offensive linemen don’t strive for plain gold. Rather, they look towards the maroon and gold standard of Boston College. It’s one of the first schools on the college search checklist for linemen, the highest of collegiate peaks with the toughest requirements.

Newcomers enter into a place of tradition and legacy. Esteemed alumni include Damien Woody ’99, Dan Koppen ’03, and Chris Snee ’04, all of whom went on to long and illustrious Pro Bowl careers in the NFL. Recent graduates and first round draft picks Anthony Castonzo and Gosder Cherilus currently ply their trade in the league. Last year’s class alone includes Andy Gallik, Bobby Vardaro, and Ian Silberman, who are all on NFL rosters to start the year.

The dean of this prestigious University is head coach Steve Addazio, who has had “offensive line” in his official title all of the 27 years of his career until becoming head coach of Temple University.

These young men have a lot to live up to at such a well-respected institution for offensive linemen.

This semester, however, class started just a few short hours ago for BC’s O-Line. The Eagles graduated all five starters last year, and this year’s corps of lineman showed up a little late.

“There’s still quite a bit of this going on,” Addazio says, his finger rotating about in the air in a circular, endless motion.

A solid preseason scrimmage has put Addazio in a good mood, but he’s still not sugarcoating anything about the state of his offensive line. Nothing is set in stone, and there is still a lot of work to do before this group settles.

Throughout spring practices, fall camp, and even into the first game week, the O-Line has been put through an endless stream of rotations by Addazio and offensive line coach Justin Frye.

One guy in, another out. Slide one spot over, or maybe start snapping the ball. It doesn’t matter for these players. If they want to see snaps with the first team, they have to shift constantly. Most guys are playing two positions, some three.

Positions no longer matter. All the coaches want are the five best guys out there for week one.

Junior Jim Cashman has been rotating between guard and, well, everywhere, according to Addazio. Fellow junior Frank Taylor, listed as the backup center last year, has taken the majority of snaps under center, but sophomore Jon Baker, a true guard, isn’t far behind. Young players like redshirted freshman James Hendren and true freshman Chris Lindstrom have been pushed into the first team at times, with no college experience under their belts, while another redshirted freshman Sam Schmal hasn’t played much in preseason but expects to compete.

While the offensive line is Addazio’s specialty, he is gambling with weak cards. The five positions are separated for a reason: guard is different than tackle, and both are different than center. Tackles are usually taller and quicker, as they have to go up against the speed of the edge rush.

BC is running some risky business by constantly re-positioning guys who can’t put all their energy into one spot, and may not even be the right fit based on body size and skills. If anyone can do it, though, it’s Addazio.

The constant change of positions and lack of cohesion causes major problems for the offense. The offensive line is the biggest factor on the team. Without a strong group of five, what’s left is a quarterback who can’t survey the field and a running back who can’t run. That’s critical for a team with a strong crew of running backs and a new quarterback.

Running backs Jonathan Hilliman and Myles Willis need holes to open up for them before they showcase their thunder and lightning in the open field. Block a few defenders first, the field opens up, and then the skill of the hard-nosed duo will do the rest. Hilliman especially can make a defender miss, but he can’t break through tackles without protection first. Few teams have ever managed to dominate without a strong line, as it requires a special type of ankle-breaking backfield to do much.

While it’s obvious that the running backs need a solid line, the situation becomes far more dire when looking at BC’s specific quarterback situation. Darius Wade is supposed to keep defenses more in check with an improved arm over Tyler Murphy. If there is one thing that BC needs immediately, it’s a balanced attack. He can still run, but we learned last year you can only go so far on the ground.

He will need pass protection to be able to sit in the pocket and read the defense, or else he won’t improve greatly as a passer. If he can’t improve as a passer, BC’s offense does not balance out, defenses can stuff the box, and the Eagles are right back to desperately relying on one man’s magic to bail them out over and over again.

While Wade can say it’s all about timing and getting used to the tendencies of his teammates protecting him, it’s not that easy.

“We are in a footrace to get to where we need to be,” Addazio said.

For every rotation of linemen that Frye and Addazio go through, the hour hand goes through its own rotation around the clock, counting down to the first judgment day for this group of men. Maine comes to town in just a few short days.

As of now, there is only one certainty for that first game: Harris Williams, the one they all call Grandpa. Dave Bowen and crew started the nickname based on the fact that the senior has been around the block with the Eagles a few times.

Returning from a season-ending injury last year, Williams will be in the lineup on Saturday at right guard.

A starter two years ago—blocking for Andre Williams—Harris went down with an injury in the first game against UMass last fall that kept him out for the entirety of 2014.

Even then, Williams only accounts for the corner piece of the puzzle—that one you find right away and arbitrarily place in the top right, unattached to the rest. He’s a guarantee—you instinctively find the piece with two flat sides when starting the puzzle—but nothing is around him yet because he hasn’t been taking snaps in preseason.

With Harris on the sidelines, the process of finding chemistry becomes even more complex.

“Cohesion is a hard question because the guys working are getting cohesive, but it’s an illusion without Harris,” Addazio said.

Missing a key cog such as Williams in preseason leaves the team a step behind going into game week. Not only will Harris have to play himself into game shape, but the linemen around him will still be finding chemistry well into the season. Even if any combination of five guys gel, it won’t be the starting lineup if Williams isn’t there.

It takes time to fully learn the tendencies of the guys to your left and right, but starting off at home against soft opponents like Maine and Howard will certainly help ease this group into ACC play, starting with Florida State in week three.

What the team has missed out on playing without Harris, they have made up for in his knowledge and experience.

On the sidelines of one preseason scrimmage, he looked more like a coach than a player, roaming the sidelines in full pads, following the actions, and stepping onto the field to offer his grandfatherly wisdom to the youngsters. Despite not getting that hands-on action, he is never far away.

“I’m excited to see him back out there, rolling around with all the knowledge he’s built up over the past year,” Frye said.

With no hesitation from either Frye or Addazio on the starting status of Williams, the number of spots shrinks and the rotations approach mach speed as seven linemen vie for the remaining four spots.

Those seven would be Dave Bowen, Jon Baker, Frank Taylor, Jim Cashman, James Hendren, Sam Schmal. A quick recap: Seven guys, two redshirt freshmen, only one start last year between them, and only four spots for them in the starting lineup.

The situation gets murkier on the second team, which features two players, Austin Stevens and Joel Rich, who only just moved to the offensive line in the spring.

Expect Cashman and Bowen at tackle, Taylor at center, and Williams and Baker at guard. Aside from Williams, though, anything goes for this group. Addazio will have them on the tightest leash possible, as touted recruits Wyatt Knopfke, Anthony Palazzolo, and Aaron Monteiro loom not-so-far behind.

This is make or break time for O-Line U, and optimism is not at an all-time high.

“Good shape? No. We’re getting there,” Addazio said after practice.

Until they get to that point, they will continue to be put through final exam after final exam by professors Addazio and Frye.

Emerging from the dismal and dreary depths of preseason orientation is this group of freshmen, led by one elder statesmen, rushing through campus. Who knows where they will end up by the end of the semester, but class started two hours ago, and oh, they are all a bit late. 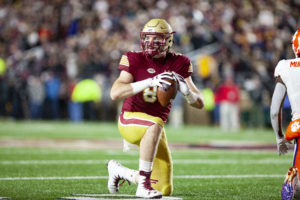 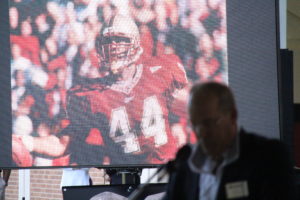