Home » BC Defeated By Providence In Double-Overtime Heartbreaker
Fall

BC Defeated By Providence In Double-Overtime Heartbreaker

The announcer’s voice echoes through the speakers. “Ten … Nine …” The swarm of black jerseys breaks into the penalty box. “Eight …” The defenders in white dodge left and right to catch their opponents. “Seven …” One black jersey emerges from the pack in front of the goal. The home team’s goalkeeper is ready to pounce. “Six …” The ball leaves the visitor’s foot and rolls toward the left post as the keeper dives to grab it.

“Five …” The ball brushes the keeper’s fingertips and rolls past the goal line. The black jerseys gather and cheer as they rob the home team of a win and send the game to overtime.

Both teams came out hot and were aggressive for the first 30 minutes, helping to maintain a fast pace of play. The Eagles’ solid defense allowed for quick transitions and strong offensive plays but the team struggled to find the net.

Providence took control and broke in to challenge goalkeeper Alex Johnson. She dove left and right to deny any goal and send the ball up to her offensive players. On the other end, PC’s Kristyn Shea was doing the exact same thing.

The goalies battled back and forth, denying every ball from touching the back of the net. In the 37th minute, the Friars’ Rachel Ugolik dribbled up center and bent the ball into the upper left corner of the goal. It looked like Johnson was there but the shot was just out of reach, brushing her fingertips before hitting the back of the net. With two injuries and plenty of missed opportunities, the Eagles needed to think of a new gameplan before heading into the second half down 1-0.

At halftime the Eagles had a lot to talk about. “We knew what system they were going to play,” head coach Alison Foley said. “I didn’t think that they were that dangerous in terms of being up top but we talked about winning the 50-50s and making sure we go through on our tackles, defend hard, and win the second balls.”

Coming out for the second half, BC stormed down the field to put pressure on Shea. The Eagles were clearly hungry for a goal. Eight minutes into the half, Gaby Carriero passed to Lauren Bernard, who turned the ball to Meehan, who one-timed it into the goal to tie the match. Minutes later, Meehan was sent out with a bloody nose. When she returned she was hot out of the gate. The Eagles ran down the field and Berman crossed it to Meehan, who nailed it into the back of the net to score her ninth goal of the season and giver her team a 2-1 lead.

For the remainder of the match, BC tried to slow the game down and play keep-away from the Friars. With 30 seconds to go, PC snagged the ball away and took it down field. BC’s defense attempted to pop the ball out but got tripped up with just seconds to go. The Friar’s Ugolik saw an opportunity and slid a low roller right past Johnson’s fingers to tie the game 2-2.

In the first overtime, BC saw plenty of opportunities on goal but each shot went wide or found Shea’s hands, leaving the game tied at 2-2. After a two-minute intermission both teams were ready for a second attempt at sudden victory. Just 22 seconds in, Catherine Zimmerman sent a low roller into the net, taking advantage of the extra space. The Friars stormed the field as the Eagles flocked back to the bench in defeat.

The Eagles are not discouraged from this tough loss. Once the team finds its flow it knows it will be a force to be reckoned with. “Right now it seems like either Hayley Dowd is on and McKenzie’s not or McKenzie’s on and Hayley’s not,” Foley said. “We hope to get them both clicking on game day. Along with the help of Gaby Carriero, we will be a lot more dangerous.” 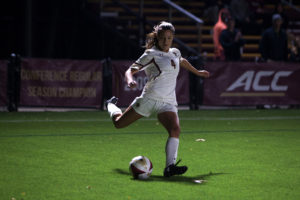 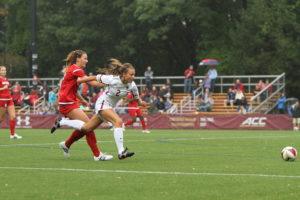