Patience. Poise. Persistence. Those were the keys to a 2-­0 victory over the visiting Louisville Cardinals for Boston College women’s soccer in Newton this past Sunday.

From the outset, BC controlled the pace and quickly neutralized any offensive opportunities that Louisville had. The Eagles scored their first goal in the 11th minute, setting an early tone for the remainder of the match.

Tic­-tac-­toe passing in the midfield opened up the heart of the defense for a run by junior forward Hayley Dowd, who snaked through the middle and into the attacking third. In the span of mere seconds, she was twice presented with an open passing angle to junior McKenzie Meehan, but Dowd kept possession of the ball, waiting patiently for the perfect opportunity to sneak a pass behind the Louisville back line.

After a few more touches, Meehan made her move, and Dowd poked a slithering through-ball between a pair of Cardinal center backs, setting up a one­-on­-one square-off between Meehan and the Louisville goalkeeper Taylor Bucklin. Meehan took one touch and bent the shot around the keeper for her 10th goal in as many games—a textbook finish.

Meehan’s penchant for putting the ball between the posts has earned her considerable recognition this season­­.

But the play of Dowd, her partner in crime at the top of the formation, has been nothing short of terrific. It’s the perfect offensive combination of honey and vinegar, as the two employ completely different styles on the field.

Meehan is the stoic, calculating, silky-smooth assassin, while Dowd is the tenacious ballhawk pestering the defense for 90 minutes, the soccer equivalent of a forechecking grinder in hockey.

A perfect example of Dowd’s constant pressure came late in the second half, when she swiped a pass from a Louisville defender along the back line and headed toward the goal. The BC forward ultimately sailed the ensuing shot over the crossbar, but the sequence was a microcosm of what Dowd brings to the table for a dynamic Eagles attack.

BC head coach Alison Foley had the Eagles playing in an amorphous 4­-3-­3 formation, and players from each area of the field excelled.

Timely passes from redshirt freshman midfielder Shea Newman swung the door wide open for unrelenting forays into the attacking third. Left back Lauren Bernard did a good job containing Louisville’s Rachel Avant, an athletic midfielder who will make teams pay for not keeping a close eye on her.Sophomore defender Madison Kenny used her brawn and quickness to run Cardinal attackers off the ball. Keeper Alexis Bryant didn’t face many threatening shots, a testament to the tight line the defense in front of her kept throughout the match.

It was a quality effort from the whole team, a healthy response to the 3­-2 double-overtime loss last Sunday against Providence. 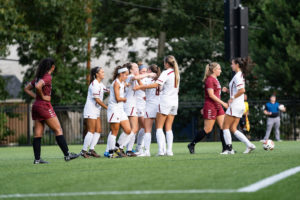 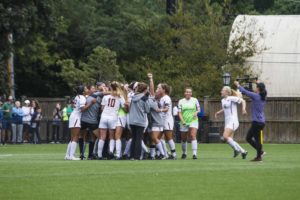