Home » A Late Encounter With The Harbor 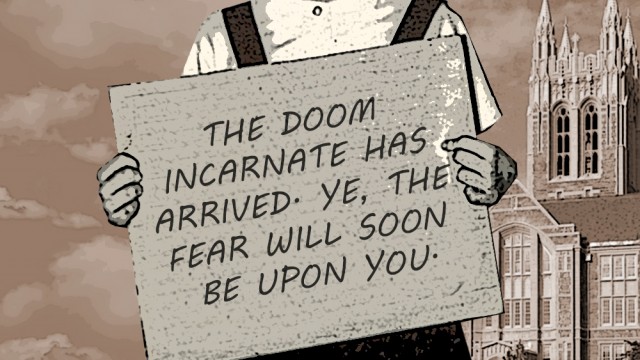 A Late Encounter With The Harbor

This past weekend I marched from the Mod parking lot to Gasson and back carrying a large cardboard sign that read, “THE DOOM INCARNATE HAS ARRIVED. YE, THE FEAR WILL SOON BE UPON YOU.” As I walked many of my admirers stopped and said hello, smiling at me congenially.

“You fools,” I yelled in return. “Can’t you smell the bacon?”

“I don’t get it,” they whispered concernedly to each other. “Is he trying to be funny?”

After my 3576th march back to Gasson, sign hoisted against my shoulder, I was stopped by my favorite professor, and personal mentor, Winston Vatraizmet Hufflepants.

“Archer, dear God! What’s gotten into you?” he asked.

“The wheelchair assassins are coming for me,” I said. “Outsized mutant infants and feral hamsters!”

“All right, little buddy,” Professor Hufflepants said. “You’ve been reading a little bit too much. Let’s go get you some coffee and see if maybe we can find your mind somewhere.”

So, an hour later, I sat with Professor Hufflepants in The Chocolate Bar sipping a Chai Mochachino Double Whip Fire Fart Latteissimo.

“I’ve been a bit overwhelmed by life,” I said. “My every day, and extraordinarily relatable, college student struggles are really getting to me. Let me tell you right now, there is nothing, absolutely nothing, harder than being a college student. My problems are gigantic, absurd, and unconquerable. Not a single other human being on this big, green earth has it as hard as I do, and, by relation, as hard as other college students who can completely, 100 percent relate to this column. I mean conversation.”

“Your problems are infinitesimal and your self-pity is vomit-inducing,” Professor Hufflepants said. “Go do something enjoyable and stop being a useless child.”

“I was thinking of buying a couple of peacocks, moving to a farm in Georgia, and living out the rest of my life writing fantastic short stories,” I said. “What do you think of that?”

“Thanks for the help Big P Huffy Huffmeister,” I said. “I think I’ll go do something fantastically worthwhile right now.”

“Never call me that again.”

And so I found myself only two hours later sitting on a slow-moving B line train into the city. It was time to attempt a city appreciation experiment known as “Simple Pleasures.” Although, of course, I know every single nuance of Boston and have a nearly encyclopedic knowledge of the various attractions, I decided to forget that and just appreciate one great part of the city: the harbor.

One of the key points of Boston’s existence is the fact that it is on an ocean. Believe it or not, the majority of the country is nowhere near an ocean. So, while you’re here, it is imperative that you appreciate the water.

From Revere Beach down to Boston, there is plenty of shoreline to explore. Personally, I enjoy walking from Faneuil Hall down to the Long Wharf while listening to The Departed soundtrack (Howard Shore) and pretending I’m doing something interesting with my life.

As it gets colder you might say, “Hey Archer, I don’t want to go to the ocean because it’s freezing outside and my teeny little toes will get cold.”

Cold weather makes the ocean even cooler. You can stand on the beach, boardwalk, or wharf while wearing a black jacket bundled up around your neck and grimacing at the water. Isn’t that all anyone could ever want? All you kids these days with your uptempo music and your internets no longer appreciate staring at the water and grimacing. Listen to a little Bobby Darin and appreciate the lapping waves, you poor excuse for a scumbag.

If you’re looking for a nice, solitary way to wind-down from a hard week of living, go check out a gigantic pit of salt water. It’s dramatic, it’s cinematic, and it’s Archermatic. That’s all I have to say.

That’s not really all I have to say. I’m obliged to warn you that if you don’t take my advice and head on down to the long wharf/ocean area you will almost assuredly end up walking up and down campus carrying an insane-message-emblazoned sign, so what I’m telling you is in your best interest. Keep that in mind as you learn to appreciate the simple things. 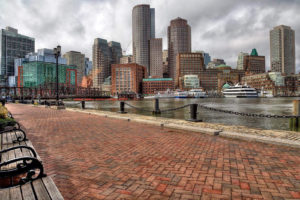