Home » HUBweek Revisited: Reflections From The Forum At Faneuil Hall 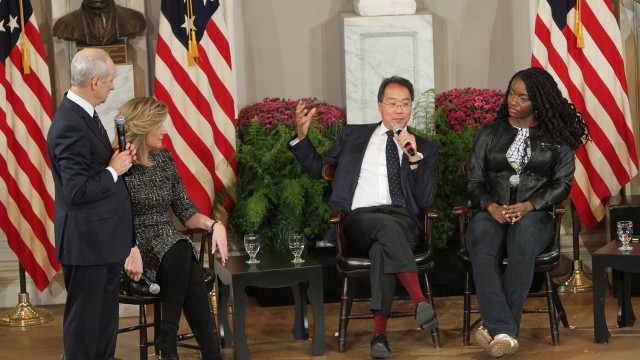 HUBweek Revisited: Reflections From The Forum At Faneuil Hall

This week I was tasked with the greatest Metro-related assignment of all time.

“It’s HUBweek,” Niles, my personal editor, told me. “It’s a city-wide week meant to bring the best of Boston to the forefront. The event kicks off tomorrow with the Fenway Forum panel at Faneuil Hall. It’s a discussion filled with people who are all better and smarter than you, Archer, you pug-faced mongrel. Go and cover it for your column.”

I agreed to go and must now attempt to recreate in print the fiery intensity of that grandiose city-pride-filled cabal.

The day started as I sat outside Corcoran Commons, clutching a cup of hot chocolate and popping my black jacket collar around my neck in a very James Dean-esque manner. I heard someone call my name and saw the two Heights editors who would be joining me on my journey. I also heard the squish of refuse-covered boots hitting the cement and saw Niles, whose debilitatingly-negative presence seemed to always be following me around, walking my way.

“All right, gang,” I said. “The four of us better get moving if we want to make it to this talk in time.”

“There are only three of us here,” one of the Heights editors said, squinting at me in a confused, slightly alarmed manner.

“What’s his problem?” I whispered to Niles, whose breath stank of cigarettes and coffee, his eyes bloodshot and filled with sinister glee.

We reached Faneuil Hall and took our seats. As the crowd filled in and the talk itself grew closer I could feel excitement surging through my veins like caffeinated America-loving cheese cereal.

“Sweet Caroline” began playing over the speakers and, with little forewarning, the entire crowd lost its collective mind. It was complete buffoonery that could only be explained by the power of Neil. One man stood in the crowd and waved his hands in the air to the sweet rhythms of N. Diamond. I contemplated the state of shame in this country. The intense weirdness of the moment was multiplied when the sound of some sort of pan-flute instrument began echoing around the hall followed by the sound of bagpipes. With no explanation, a man and woman carrying these instruments began processing down the aisles playing some strange tree-music folk song. The musicians took the stage and began stomping and playing, soon joined by other instrumentalists. I was filled with the strong, surreal sense that I had woken up inside a scene from one of my own ridiculous columns.

A surprisingly engaging and amusing debate/discussion ran for almost an hour-and-a-half between this group of accomplished intellectuals. For a recounting of the moral discussion and the fascinating specific aspects wherein, I’ll direct you to Bennet Johnson’s article covering this event. Personally, I’d like to stick to one component that I believe deserves a little “good old fashioned columnizing” (Copyright AP Industries Columnizing Division).

At one point during the panel discussion Yo-Yo Ma engaged in a semi-confrontational debate with MIT professor Andrew McAfee over whether an extremely sophisticated computer should ever be used to grade expressive essays (e.g. philosophy, poetry). As I sat there watching this, my constantly-roaming mind began to wonder about argumentative discourse.

McAfee presented a convincing, evidentiary argument for why advanced computers would be better suited to tasks such as grading, convicting criminals, and determining the perfect mate. He cited various studies and laid down the facts like a well-presented sandwich. Yo-Yo argued that computers can never match the human spirit and argued for our uniqueness. The people loved Yo-Yo, they cheered and applauded after almost every humanistic argument he made, even when it didn’t 100 percent match up to McAfee’s logic.

The debate reached its zenith when McAfee dismissed Yo-Yo’s argument as “lovely language,” and Yo-Yo responded with, “It’s more than language. This is content.” The crowd applauded Yo-Yo’s snappy comeback and reaffirmed their love for his technology-reducing argument. This pro-humanistic mentality applied to almost every argument presented in the debate. The crowd seemed to value efficiency and technology beneath the human spirit.

This sentiment was even backed, to an extent, by Sandel, whose closing statement argued for the reigning in of our need for “mastery and control,” so that we don’t constrain our humanity. The interplay between ruthless, digitized efficiency and our desperate need to cling to our God-given human spirit with all its imperfections provided a fascinating and touching backdrop to all of the complex moral philosophizing that occurred that night.

As the event ended, I felt legitimately illuminated by the discussion. A number of grandiose and deeply affecting thoughts had been packed into a relatively small hour-and-a-half that perfectly showcased the intellectual and artistic greatness that Boston has to offer.

As I left Faneuil Hall, I smiled to myself. The dark skies overhead and the cool Fall breeze were invigorating. My dark mood of weeks past fell away. The two Heights editors who had accompanied me walked alongside. I suddenly realized that my other foul-breathed constantly-cantankerous companion wasn’t walking beside me.

“Niles?” I said turning around, expecting to see his terrifying dead-eyed visage. 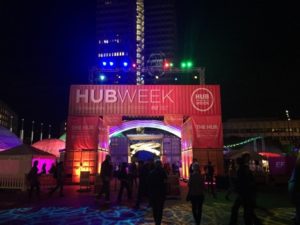