Home » Why Access To Resources Matters For Student Musicians 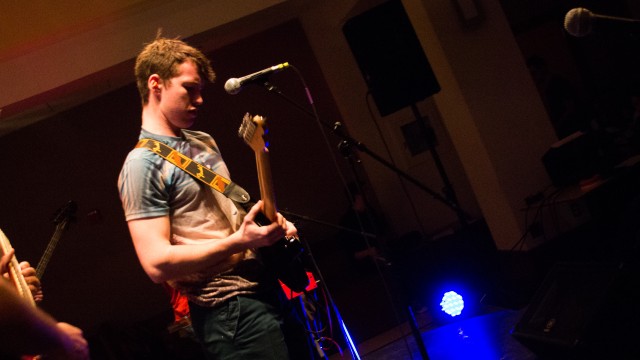 Last week, when Sean Seaver, MCAS ’16, was recording vocal takes in Lyons, he received an email informing him he could no longer make use of the lab in that academic building. Seaver is a work-study student who had been taking advantage of his special access to Boston College’s media lab to record in the studio, and he was taken aback by the sudden enforcement of a rule that said only students in certain classes could use the space. He, along with fellow work-study student Dan Lyle, MCAS ’16, hope that media lab faculty will loosen restrictions on the area, which is the only dedicated studio recording space on BC’s campus.

Seaver’s band Small Talk has used the space to record an EP and is in the middle of recording another. The band, a frequent act in the Music Guild’s open mic nights, has also performed at BC’s Superfan Zone. Other student musicians have performed in Arts Fest, a week-long extravaganza that touts the dedication the University has to the arts.

The University spends a week displaying the work of BC’s artistic community, but the rest of the year is often unable to provide these students with resources they need. While other majors—including computer science and hard sciences—have generous resources set aside for their studies, the media spaces, recording equipment, and darkrooms vital to the creative fields are often restricted, outdated, or inadequately supplied.

Some student musicians have used crowdsourcing campaigns, or personal money, to install personal sound systems to use to record music. Students who are not yet able to make money off their music or come from less privileged background, however, are in need of a space to record and equipment to gain vital career-oriented experience in the arts.

This semester, the music department lost several classrooms when the fourth floor of Lyons was restructured. One of these classrooms was used by the Music Guild, which was able to find a new space in Carney. The University ought to make it easier for students to practice and record music, rather than removing their classrooms and forcing them to use backdoor entries into the recording studios.

It makes sense that students in production classes are able to use the equipment they need—they are being trained, and have an interest in it. But, their access should not be shut off when they finish the class. Rather, if the University has a genuine interest in nurturing and growing student musicians—especially those who are considering a career in music production—it would encourage them to continue to use the studio after the class is completed. If the studio can’t handle the capacity, there needs to be an increase in studio space, and with it, a loosening of restrictions on artistic resources at BC. Those students who had been working around the rules and taking advantage of the studio in the past few years, however, emphasized that they used the equipment when it was otherwise lying dormant. Without a push by the administration to open up and expand access to the valuable media resources, there’s little real opportunity left for artists on campus.