Home » In Lyons, A Contested Space For Recording 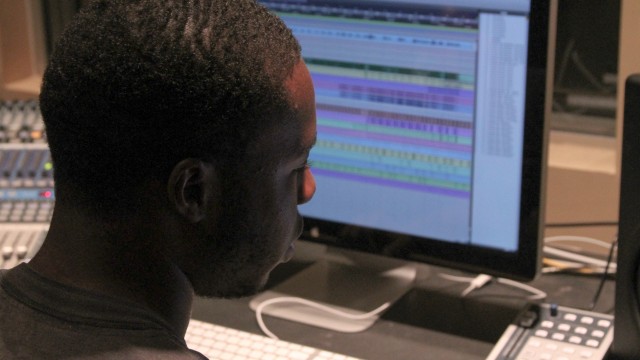 In Lyons, A Contested Space For Recording

On the second floor of Lyons Hall, down the hall from the romance languages department, through a door on the left, is an office and several rooms filled with mixing and recording equipment. In the front office, a work-study student lab monitor sits with oversized headphones on, mixing music on his personal laptop. The professional equipment sits unused in the room behind him.

For the past two years, it has been easy for this student, Dan Lyle, MCAS ’16, and his co-president of Music Guild, Sean Seaver, MCAS ’16, to record in the studio space in the media lab. But recently, Marcus Breen, director of the media lab, has been minimizing unauthorized use of the lab. Technically, the lab is only supposed to be used by students currently in one of the two music classes that train them to use the equipment. Once the student is no longer in those classes, the access is revoked. Breen did not respond to requests for comment.

In the past, work-study students like Lyle and Seaver would use the lab when another work-study student was working. Last week, however, while Seaver was doing vocal takes in the media lab, he received an email from Breen saying that he could no longer use the lab. Seaver has recorded part of the most recent EP for his band, Small Talk, in the media lab. The EP they released in April was done completely in the lab, though only three of the six members of Small Talk are students at Boston College.

“The first time I came in here, I was like, ‘I’m going to live in here,’” Seaver said. “I was so blown away by all the equipment. The most exciting thing was like, I don’t know how to use all of this but I will one day … and now that I have all the know-how, I no longer have access.”

Other students interested in using the resources in the media lab are required to sign up on a Google Form, but work-study students do not regularly check the form when students walk into the office, Lyle said. In addition, the work-study students do not have a master list of students who take the classes required to use the labs, so they have no way of checking whether a student walking in technically has permission.

“The first time I came in here, I was like, ‘I’m going to live in here.’ I was so blown away by all the equipment. The most exciting thing was like, I don’t know how to use all of this but I will one day … and now that I have all the know-how, I no longer have access.”

The media lab in Lyons has been operated by the communication department for over 20 years, said Lisa Cuklanz, the chair of the department. It is meant to support the production courses, and has never been open for use by anyone other than students enrolled in courses that use the lab, she said.

“These students pay a lab fee to support the facility and equipment,” she said in an email. “There are no plans to open the lab for general use. Our commitment remains to our students and to the support of their academic work.”

Lyle and Seaver, who are both work-study students in the lab, have taken the two classes. One motivation to work in the lab, Lyle said, was to gain access to the recording equipment. It was communicated to him that his job did not necessarily give privileges to work in the lab, but he said that he never encountered problems with professors while using the lab.

“It wasn’t a secret that we were using the lab,” Lyle said. “Before the last week, this wasn’t an issue. It was an unwritten rule but at the same time, since nobody was cracking the hammer, it was like, ‘Is this even a rule?’ Our usage of the lab doesn’t affect the students in the lab or the professors in the lab.”

Similarly, Seaver said that he made a point of only using the lab while it was not reserved by anyone else. Cai Thomas, student documentarian and MCAS ’16, pointed out that BC invests a lot of resources into the one week of Arts Fest, but does not provide year-round sustainable resources. For her and other students, the media lab is the equivalent of a library, but it is not open as often as they need it to be. Lyle said that last year, the lab was open for most of the week, but this year, available hours have been cut in half.

“We get it,” Lyle said. “This place wasn’t built to be a recording studio, and that’s their perspective of it and that’s perfectly valid, but the resource does go to waste. And it goes to waste because one, people don’t know it was here, and two, if they did know it was here, they don’t have access to it.”

As an employee of the media lab, Lyle has assisted with the recording of various projects for the BC community, including a promotional video for James Kale, LSOE ’16, and Jose Altomari, MCAS ’16, when they ran for president and vice president of the Undergraduate Government of Boston College.

He also was in the middle of recording an EP for Wynnm Murphy, MCAS ’18, her prize for winning the singer-songwriter competition this past year.

Other projects, like the sound for the “BC Funk” video, have been recorded in the media lab as well, Lyle said. More opportunities could open up for the BC community, Lyle said, if more students could use the lab.

When students in the audio classes are not using the equipment, it often sits unused, despite the high quality of the equipment, which is worth over $10,000, according to Seaver.

Lyle hopes that any decision made about the lab will include the opportunity for student input. He understands that the classes should be a requirement, because that is how students become trained in the equipment.

“I feel like the system that we already have in place with student access in the classes can just be extended to people who are interested in the space and what the space allows you to do,” he said. “I’m ok with the idea that the classes are a requirement with people who want to use the lab because that’s where I learned to use the equipment, and unless I was an audio wizard before I came to BC, I don’t think I would have learned to use a mixer.”

Both Seaver and Lyle hope to go into the music industry upon graduation. They are both graduating this spring, and Seaver noted that he is aware he could not use the lab after that.

However, he saw these last several months as a home stretch on his way to being a musician. Anyone who takes the classes ought to have access to the lab, he said, and the restrictions especially hurt students who know how to use the lab, but no longer can.

He would not spend 40 hours per week in the lab unless he loved it, he said.

Correction: this article has been updated to reflect the fact that three out of the six members of Small Talk attend Boston College.