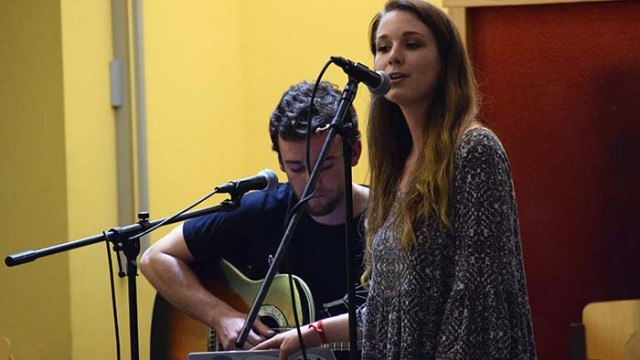 In our increasingly fast-paced world, the open mic is perhaps one of the last great institutions that goes against everything that social media has been trying to get us to do for the last 10 or so years. For one, the open mic thrives on genuine openness and vulnerability. Contrast this with our newly-ingrained tendency to offer up highlight reels and best-of collections. When individuals have total control over what they’re projecting to the world, with tools like Facebook and Instagram, the results tend to be controlled narratives that forsake actual information for showy, highly planned bits of self-aggrandizement. The open mic is special because it encourages people to drop their guards and act spontaneously. When the kid who just learned to play guitar last month starts playing a song he wrote in his bedroom, he’s no longer fronting his optimized image to his equally self-consumed followers. Compared to our society’s predilection toward perfectionism, he’s actually taking a massive risk. And even just that little spark of actual realness is something to be seized and celebrated.

The Music Guild’s bi-weekly open mic tends to fluctuate in participation throughout the semester. The first few, before the general wear of assignments and responsibilities sends students deep into seclusion, tend to draw a large crowd of performers and listeners. During these sessions, it’s pretty common for the performers to have less than five minutes per set. Both big groups and soloists take to the mic with well thought-out arrangements of covers and originals. Their friends shout out in the back between songs, as the audience tends to support everyone from the acoustic songsmith to the self-starter vocalist.

Thursday night’s open mic felt much smaller by comparison, which was perhaps to be expected as Boston College lunges forth into the last homestretch of the spring semester. The fair weather masses were replaced with a dense core of devoted performers and listeners, but this was in no way disadvantageous to the evening. The result was an even greater emphasis on intimacy and spontaneity.

The evening opened with Chris Dalla-Riva’s, MCAS ’17, spin on the classic Beatles song “Blackbird.” For a song that has likely been played in open mics since time immemorial, Dalla-Riva managed to keep things fresh by inserting bits of originality within the typically subdued rhythm of the original. His acoustic guitar plucked along as he helped establish a tone for the rest of the evening. While covers of classic hits tend to be very popular at open mics, the evening also featured a few interpretations of songs that are still trending in the charts. Tucker Davey’s, MCAS ’16, cover of “I Took A Pill In Ibiza” was compelling and remained true to the song’s originally acoustic character. Another interesting performance was Nicole Rodger and Alex Moran’s, both MCAS ’19, cover of “Roses” by the Chainsmokers. With Moran holding down the song with a guitar, both performers traded off on primary vocal duties. The result was a beautiful display of intertwined melodies and well-versed harmonies.

One of the evening’s strongest and strangest performances came from Music Guild co-president and long-time open mic provocateur Sean Seaver, MCAS ’16. Laying a guitar across his lap, Seaver began to gently slap the instrument’s neck to emit a bright wave of harmonics that began to form the outlining rhythm to a new song. Seaver’s proceeding lyrical contributions seemed to spring forth from the unlikely intersection between tongue-in-cheek playfulness and dead-serious artistic expression. The song was a manifestation of all the essential qualities that make open mics so endearing and pleasantly weird.

Another evening highlight included an original piece by Alex Moran titled “We Hold On.” The song was written by Moran about her transition from high school to freshman year at BC. Noting a discrepancy between her actual self and the image she puts forth on campus, as necessitated by our society’s unrealistic expectations for young women, the song was a shot against all the facets of our college experiences that go against authenticity and emotional connection.

The Music Guild’s open mic night is a great opportunity for songwriters and performers to escape the often-stringent requirements of our increasingly surface-level society. As each of the performers took risks in executing his or her artistic vision, the room was elevated beyond ordinary social pressures.