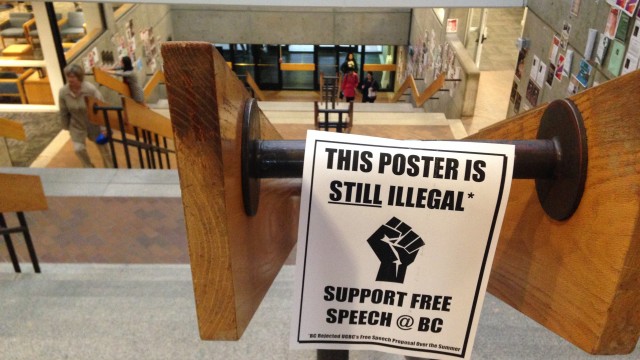 Black and white posters criticizing Boston College’s policies on free speech were hung up around campus early Tuesday morning. The poster dump was organized by a collection of students who do not identify as an organized group. The posters read, “THIS POSTER IS STILL ILLEGAL SUPPORT FREE SPEECH AT BC,” with a footnote adding, “BC Rejected UGBC’s Free Speech Proposal Over The Summer.” By noon on Tuesday, all posters in O’Neill were removed.

The posters are in response to the University’s failure to move forward with a free speech proposal spearheaded by Thomas Napoli, president of the Undergraduate Government of Boston College and MCAS ’16, according to a sophomore involved with the flier distribution. He requested that he remain anonymous, to avoid potential disciplinary consequences.

“A lot of people didn’t realize it happened, so this is to spur the conversation, to help people realize this was rejected over the summer, and it kind of got swept under the rug,” he said.

Last March, the same group of anonymous students posted about 500 similar fliers around campus, which were removed by facilities management over the course of a week. Current University policies requires that all posters on campus be approved by the Office of Student Involvement.

“Last year we just became very frustrated,” the student said. “It’s no organized group. It’s just a group of us who feel very strongly that the school is not allowing us to express our free speech, and especially cracking down on free speech that is counter to their values, so we felt that this is one of the outlets where we could fully publicize that there is an issue with free speech.”

This year, the group of students plans to be more strategic in how they hang up the fliers, with hopes that they will not be taken down as quickly. The student noted that there were some posters, last spring, that stayed up for months because they were in out-of-the-way locations.

When the posters were hung up and then taken down last year, Dean of Students Thomas Mogan noted that the policy in use at BC is similar to the one at Villanova University, and that the incident only reinforced the need for such a policy.

The member of the group said that they plan to continue hanging up the posters.

Mogan did not immediately respond to a request to comment.

2 COMMENTS ON THIS POST To “In Protest Of BC Policy, Anonymous Student Group Stages Second Poster Dump”