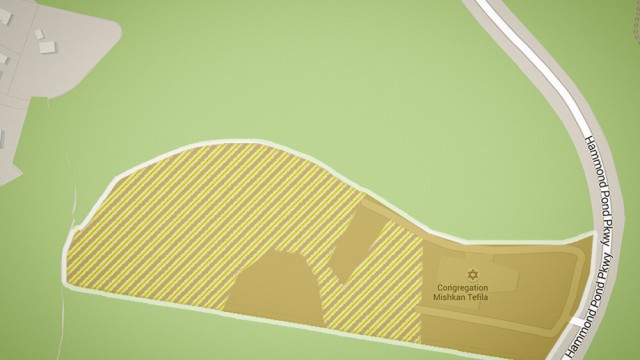 Holy Ground: In Newton, A Hope To Retain Wooded Property

Members of the Newton community are protesting—and organizing against—Boston College’s planned acquisition of 23 acres of land currently owned by Newton synagogue Congregation Mishkan Tefila (CMT). Included in the August agreement is a 14 acre parcel of wooded land attached to a surrounding conservation area, with hiking trails running through the CMT property. These residents oppose BC’s acquisition of the land based on the University’s potential to develop this space. Members of the congregation will officially decide whether to sell the property on Oct. 18.

Last week, the aldermen of the city of Newton passed a resolution that encouraged Mayor Setti Warren to conserve the wooded land, according to The Boston Globe.

“We are looking at the different means available within the capacity of the City to work with any future landowner to preserve the ecological and recreational values of the Webster Conservation Area so Newton families will be able to take advantage of these resources for years to come,” Warren said in a statement in an email.

There are several measures that members of the community hope the mayor will take, including putting conservation restrictions on the land, taking it by eminent domain, or purchasing it to prevent BC from developing the land. University Spokesperson Jack Dunn could not comment because the sale has not yet been finalized..

“Portions of the site can be protected in ways that will not require the City or interest groups to spend any money for protection.”

The CMT property is about 23 acres next to the Mall at Chestnut Hill, about 1.2 miles from Main Campus. Nine of those acres are developed, which is the area BC is primarily interested in, said Ted Tye, a managing partner of National Development who was hired by CMT to represent them in evaluating options for their property and ultimately negotiate an agreement with BC. The remaining 14 acres are wooded property. The land as a whole abuts conservation land owned by the Commonwealth of Massachusetts.

“It is natural for residents and community groups to be concerned about wanting to preserve open space that they don’t own adjacent to their properties and existing open space,” Tye said in an email. “I am very confident that this will result in a positive outcome for all parties. CMT will sell their land, BC will be able to re-purpose the property, and sensitive areas of the site will be able to be preserved.”

In August, when the agreement was initially announced, Dunn said that the open property will likely be used for administrative offices and parking. Plans do not include residence halls or academic buildings. The synagogue land was acquired by the state with the stipulation that it would only be used for educational and religious resources for 99 years, an agreement that will expire in 2052, according to the Globe.

The wooded area is used by people walking and children exploring, according to the Globe. Last week, Stephen Block, a Newton resident, expressed that BC’s purchase will cause environmental degradation.

“Please help us preserve this most crucial open space for ourselves and future generations,” he said in a letter to the editor in The Heights. “I’m a 72-year-old whose parents, myself, children, and grandchildren have frolicked in these woods.”

The Conservation Commission of Newton aims to protect the watershed resources of the area. In a letter dated Oct. 2, to the mayor and the board of alderman, the group said that they are obligated to present a “virtually irretrievable ecological disappointment.”

BC plans to meet with the city to discuss management of the land in question, according to Tye. Warren has expressed to both BC and CMT that the city of Newton does not plan to buy the land or interfere in the transaction, Tye said.

“Once the parties decide to proceed, I believe that BC will, as they have always been, a responsible member of the community,” he said in an email. “The fact is that portions of the site can be protected in ways that will not require the City or interest groups to spend any money for protection.”

A representative from the Conservation Commission of Newton did not respond to a request to comment in time for publication.

Correction: The article has been updated to reflect the fact that Dunn could not comment because the sale has not been finalized.