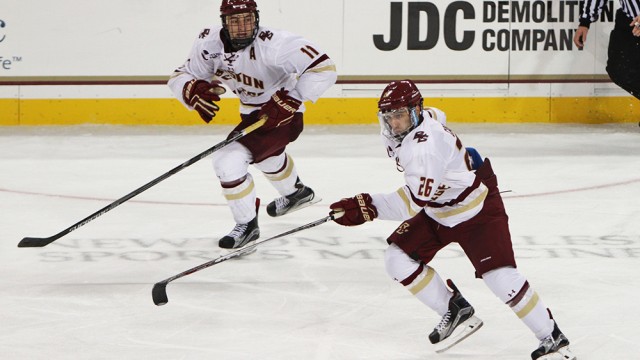 Towards the end of pre-game warmups, Wisconsin players fired off some close range shots at goalie Adam Miller. Most of them went in, and rightfully so since Miller was berated from just outside the crease, but the goalie looked out of it. It’s not that he couldn’t get to them—it just looked as though his glove was working in slow motion.

Signs of an off-night for the netminder were there early, and it only took four minutes and two goals to prove it.

Twelve seconds into the game, Miles Wood took the puck down the ice after Boston College won the faceoff. Wood gave it up to Chris Calnan, who took a shot from the right side. Miller saved it, but gave up a juicy rebound right in front of the net, one that Austin Cangelosi would not miss.

“To get one that early was a catalyst,” said head coach Jerry York.

A quick start was particularly important for the Eagles, as they were coming off a sluggish 2-1 defeat to unranked RPI on Sunday. Flipping an offensive switch on Friday night’s home opener, No. 3 BC (2-1) put six in the back of the net in a convincing 6-0 win over Wisconsin (0-1-2).

The quick start continued for the Eagles. Only four minutes after the first goal, another lapse from Miller put the Eagles up 2-0. Not long after Steve Santini committed a roughing penalty, Teddy Doherty collected the puck in the neutral zone, bouncing toward Miller, who simply missed it for a shorthanded goal.

Wisconsin head coach Mike Eaves—father of BC stars Patrick and Ben—quickly pulled the senior walk-on from goal, replacing him with freshman Matt Jurusik. Although the period ended quietly, the goalie woes continued for the visitors. Jurusik simply looked unconfident handling the puck behind his own net.

In one instance, Jurusik held the puck for too long before clearing, allowing Colin White to steal the puck from him behind the boards. White sent the puck back in front of the net, and it caught a defender’s skate before just barely being tipped out of the air by a stick.

In the other net, Demko didn’t have an off night—he just had the night off.

“I was pretty bored back there,” Demko said. “It was good to see.”

Wisconsin came out stronger in the second period and did give Demko some things to think about while briefly outshooting the Eagles. One goal would’ve changed the complexion of the game, but the Badgers still couldn’t generate enough offense to chip away at the lead.

The Eagles eventually broke through for the third time when Ryan Fitzgerald scored at 6:50 in the period. The Eagles firmly took control of the game after this goal, eliminating any chance of a comeback for the Badgers.

Bigger, faster, and simply better than their opponents, the Eagles scored two more times to close out the period.

At 16:05, Cangelosi and Wood broke free for a two-on-one opportunity. Cangelosi dropped it back to Wood in the center, who then completed the nifty give-and-go. The goalie bit hard on Wood, and Cangelosi had an open net for his second goal of the game.

Forty seconds later, White scored his first of the season on a tremendous solo effort. White played the puck in front of him at the blue line, split two defenders while still getting hit, and then slotted the puck through the five hole.

The Wood-Cangelosi-Calnan line was by the far the best unit for the Eagles throughout the night, winning every shift they played and contributing two goals.

The high-scoring period ended with a convincing five-goal lead for the Eagles.

In mirrored fashion to the start of the game, Wood immediately took the puck down the ice after the opening face-off for the shot, as no signs of BC letting up showed.

Penalties then took over the game as the Badgers grew tired and frustrated and the Eagles retaliated. Both teams drew a combined nine penalties, highlighted by a scuffle after the play in which Ian McCoshen got ejected for contact to the head and UW’s Jedd Soleway received a 10-minute game misconduct.

The first five minutes of the period were played without any 5-on-5 hockey, and the Eagles took advantage of a 5-on-3 situation to score their sixth and final goal of the game.

Ten seconds into the power play, the Fitzgerald brothers—Casey and Ryan—combined to find White near the post, who directed it past the shoulder of Jurusik for his second of the night.

While the first line couldn’t get in on the scoring action, balanced offense from the second and third lines provided the Eagles with more than enough to take advantage of a slow start from the Badgers and an off-night from their goalies. 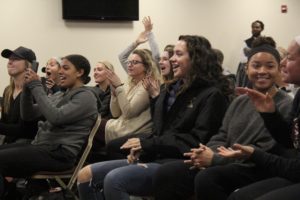