Home » Eagles Falter Down The Stretch In Loss To Louisville 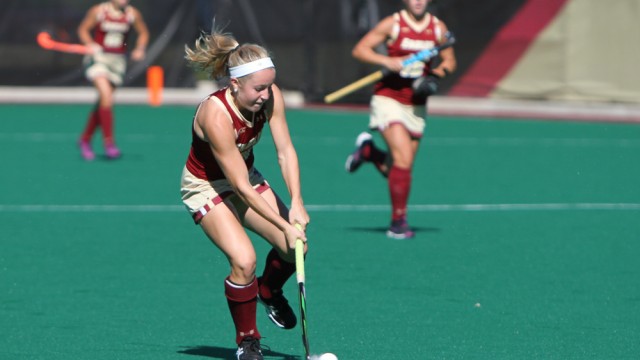 Eagles Falter Down The Stretch In Loss To Louisville

In one of its biggest games of the year, Boston College field hockey (7-7, 0-5 ACC) suffered defeat in a nailbiter at the hands of the No. 9 Louisville Cardinals (10-5, 1-5 ACC). Louisville was in control from minute one, and even down 2-0, they still seemed to be dictating terms. The Cardinals consistently controlled possession and had the Eagles defense on their heels for the majority of the game.

The opening minutes served as a good forecast of what would come. Louisville dominated possession and outshot BC 5-0 through the first 15 minutes of the game. BC goalkeeper Leah Settipane continued her great play on the year by making some huge saves in these early goings to keep the teams scoreless. In the 19th minute, the deadlock was broken by BC midfielder Elizabeth Dennehy, who notched her ninth goal of the year on the team’s first shot of the game. Shortly after, Frederique Haverhals scored her second goal of the year off of an Eryn McCoy assist to give BC a quick 2-0 lead.

With the Eagles up 2-0, it seemed like a good day for the team was in the cards. It looked like they had a chance to take control of the game and notch their first conference win. Quickly, however, the Cardinals took over again. In the 25th minute, the Cardinals seized back the momentum from Nicole Wood’s fifth goal of the year, this one off a penalty corner. Her goal sparked the Louisville players, and within five more minutes they had scored two more times to take a 3-2 lead (these goals by Elisa Garcia, her fifth, and Stephanie Byrne, her seventh). In the first half, BC was outshot 9-2. The Cardinals, despite their rough patch in the middle, thoroughly dominated play, and in fact one could argue given the shot difference, that they should have been leading by more.

The second half was dominated by the goalkeepers. Time and time again, Settipane came up with clutch saves to keep the Eagles in the game, with the biggest ones coming in a barrage of four straight Louisville shots midway through the period. For the game, Settipane netted 8 saves and allowed only three goals, strong numbers from one of the best keepers around. Her efforts were the main reason the team was in the game and had a chance to tie it up down the stretch. Given the team’s inability to consistently generate scoring chances, they needed every save she made to keep up with the Cardinals.  Louisville’s keeper also played a brilliant half, as she stopped every shot sent her way in the second half and for the game saved four shots.

With seven minutes remaining in the game, BC coach Kelly Doton called timeout, hoping that the timeout would get the BC players going. Shortly after BC pulled Settipane from the game in favor of an extra attacker. With time winding down, BC finally began to generate consistent offense. They had multiple solid chances near the box but failed to notch a penalty corner until the very end of the game.

The end of the game was a bit of a mess for both sides. As the clock hit zero, BC earned a penalty corner and one final choice to tie the game up and send it into overtime. It seemed that on this first PC attempt, the team had earned a re-corner, and the officials looked like they were going to call it. For some reason, there was no call and the Cardinals players left the field. BC players and coaches stayed on the field arguing with the refs for five minutes, trying to convince the officials that a re-corner was needed, but to no avail. In any game, it’s always a shame to end with some sort of controversy, regardless of who’s right.

A combination of factors led to the Cardinals win. BC’s inability to generate consistent offense left their defense and keeper in control of the game for the majority of the time, and no matter how great they played, it was very unlikely that they would be able to completely shut down Louisville’s offense. The Cardinals offense was also spectacular all game, they did an excellent job of controlling the game tempo and keeping it how they like it, and this definitely proved to be crucial in their win.